As Asia travel recovery commences, China keeps the walls up

As Asia-Pacific tentatively starts opening to international air travel, Beijing’s tough ‘Zero-Covid’ approach means an air travel recovery will be anything but complete for airlines.

According to IATA’s travel regulation map, China imposes tough requirements for those entering the country, including two weeks of quarantine. This is in contrast to regional peers, which are cautiously doing away with quarantines, replacing them with vaccine mandates for passengers and Covid-19 testing regimes. 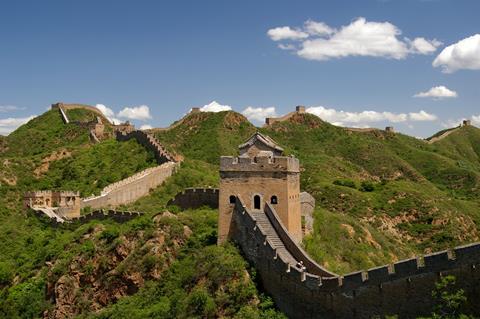 The Great Wall of China.

Leisure travel to China is basically out, and there are even considerable restrictions on visa holders. Moreover, the restrictions will discourage Chinese residents from travelling abroad, let alone support the legions of package tours that fuelled so much Chinese air traffic growth before the coronavirus pandemic.

Beijing’s commitment to Zero-Covid is underlined by its rapid development of “health stations,” where arrivals will serve their two weeks of quarantine. This initiative is exemplified by a 5,000 bed facility in Guangzhou, located 20 miles (32.2km) from Guangzhou’s Baiyun International Airport. Guests communicate with staff through an in-room intercom, with meals served by robot.

Cirium schedules data offers a dramatic sense of how big the China black hole will be for at least the short to medium term. This also applies to Hong Kong and Macau, which are more intent on travel ties to the Mainland than the broader world.

On a seat basis, the top ten carriers on Southeast Asia to China routes to September 2019 were a mix of Chinese carriers as well as low-cost airlines such as Thai Lion Air, Thai AirAsia, Scoot, and AirAsia. Thai Airways and AirAsia X, both of whom are undergoing wrenching restructurings, also figured prominently in the former Southeast Asia-China market.

One industry observer feels that China is basically irreplaceable, but that it is impossible to distribute former China capacity to other markets given that there is so much uncertainty around how the recovery will unfold. This, however, is mitigated by airlines having so many aircraft in storage. Moreover, China has traditionally been a tough market, characterised by overcapacity and low yields.

A similar picture exists on routes to China from other key global air travel markets.

Beyond the major carriers, small operators in countries such as Cambodia, and Myanmar and Laos will continue to be hard-hit by the absence of China traffic, given they are small with a near-exclusive focus on Mainland China.

And when China does eventually start to open it is unclear if group tours, so long the engine of China air travel growth, will bounce back rapidly.

Moreover, 2022 is a critical year for China. In February Beijing hosts the 2022 Winter Olympics, an event it will not like to see marred by a Covid-19 outbreak. It has already banned overseas spectators from the event.

Then, in October 2022, it will hold the 20th Congress of the Chinese Communist Party (CCP). This event is expected to give Xi Jinping a third term as China’s president. Given the political sensitivity of this occasion, and CCP’s desire to highlight its victory over coronavirus, Beijing could end up sticking with Zero-Covid until late 2022 or even beyond.

In this eventuality, airlines that based so much of their former strategy on an open, vibrant international Chinese travel market will spend long months scraping for alternatives.