South Korea’s government will step in to manage Asiana Airlines, giving the carrier a W2.4 trillion ($2 billion) fund injection after an acquisition deal with a Hyundai Development (HDC)-led consortium fell through.

The funds will come from the country’s Key Industry Stabilisation Fund with a three-year tenor from the date of initial withdrawal, the airline said in an after-market corporate disclosure on 11 September. 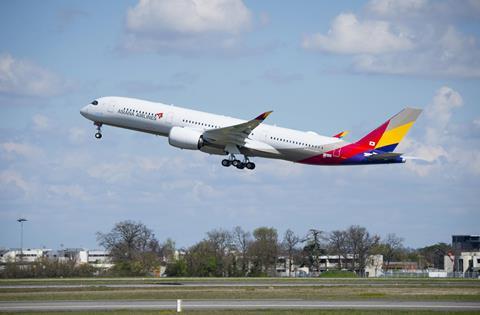 During the period, Asiana is not allowed to provide support for its affiliates, nor issue dividends and repurchase shares. Senior executives are also subject to a salary freeze.

It will also need to maintain at least 90% of its workforce for six months, among other measures that protect employees.

South Korea’s finance ministry and Asiana’s main creditor, the state-run Korea Development Bank, is widely expected to restructure the airline before seeking another buyer. The Korea Economic Daily reported on 11 September that the sale process is unlikely to happen in 2020.

The restructuring could entail a review Asiana’s network, cost-cutting and downsizing, as well as spinning off Air Busan and Air Seoul, Business Korea reported on 13 September.

The creditors could ask Asiana’s parent company, Kumho Industrial, to reduce its capital in the airline to hold it accountable for the failure of the HDC deal, The Korea Herald reported on 13 September.

In two other same-day disclosures, Asiana confirmed that the HDC-Mirae Asset consortium formally withdrew on 11 September plans to acquire a 31% stake in Asiana from Kumho Industrial.

Asiana says: “In spite of the completion of the business combination report and all the prerequisites for the transaction have been satisfied… the subject of an increase in paid-in capital [by other parties] within the transaction closing period [was not met]… [and the HDC-Mirae Asset consortium] withdrew its decision to inject capital.”

Kumho Industrial and HDC are expected to go to court over the W250 billion downpayment for the deal.