Asiana swings back to profitability in Q3

Asiana Airlines — most recently the subject of an acquisition by rival Korean Air — swung back into the black in its third-quarter earnings, helped by an uptick in cargo revenue and a steep reduction in costs.

For the quarter ended 30 September, the carrier eked out an operating profit of W5.8 billion ($5.2 million), reversing the W45.1 billion loss it made during the same period last year. 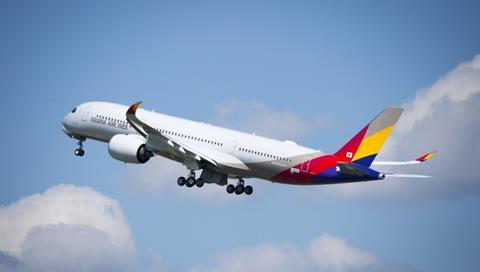 Asiana swung back into the black in its third-quarter earnings.

Revenue fell 53% year on year to W731 billion, led mainly by a collapse in passenger travel demand, which plummeted 83% year on year.

However, any further decline was offset by a 54% increase in cargo revenue to W485 billion for the quarter.

The Star Alliance carrier also swung back to a net profit of W2.3 billion for the quarter, reversing last year’s net loss of W170 billion.

Domestic RPKs for the period slipped 27% year on year, while ASKs fell 14%. The carrier reported a domestic passenger load factor of 74%, about 13 percentage points lower compared to the same quarter last year.

Asiana’s third-quarter earnings come days after rival Korean Air announced it would be acquiring the troubled carrier. The deal, worth some W1.8 trillion, ends months of speculation about who would be Asiana’s new owners, after failed attempts by parent company Kumho Industrial to sell its controlling stake.