Auditors have raised “significant doubt” over Garuda Indonesia’s ability to continue as a going concern, after the beleaguered flag carrier plunged to a record full-year loss.

In a report accompanying the carrier’s financial results, KAP Tanudiredja, Wibisana, Rintis & Rekan, a member firm of accounting giant PwC, assigned a disclaimer of opinion — given when auditor cannot judge whether the accounts have been created properly — on Garuda’s financial results. 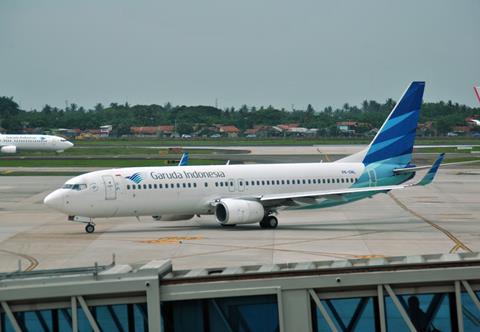 Garuda Indonesia fell to a $2.2 billion operating loss for the year ended 31 December 2020.

It notes that Garuda’s financial situation weakened due to the coronavirus pandemic, which has impacted the airline group’s performance and liquidity.

“The adverse impact on the group’s operation and liquidity has directly affected the group’s ability to meet its financial obligations to its lenders and its significant vendors such as fuel suppliers, airport operators and aircraft lessors,” note the auditors.

The carrier already has several leased aircraft grounded, after it failed to meet its obligations to its lessors, the auditors state.

“All of these conditions indicate the existence of material uncertainties which may cast significant doubt about the Group’s ability to continue as a going concern,” they add.

For the year ended 31 December 2020, the Indonesian flag carrier — currently undergoing a wide-ranging business restructuring — fell to a $2.2 billion operating loss, reversing the $96 million profit it posted in 2019.

Revenue for the full-year plummeted 67% to $1.5 billion, amid a lack of travel demand amid the global pandemic. A drop in costs failed to outpace the revenue collapse, with the group narrowing its full-year expenses by just 26%, to $3.3 billion.

Group current liabilities exceeded assets by a staggering $3.8 billion, while it reported a negative equity of $1.9 billion.

The carrier had also previously reported debts amounting to Rp70 trillion ($4.8 billion), which was forecast to balloon by Rp1 trillion every month amid the pandemic.

Garuda itself was cognisant of its dire circumstances, noting that the success of its restructuring efforts — and its ability to ride out the pandemic — depended on several “assumptions”. These include creditors and lessors agreeing to relax debt repayment and lease arrangement terms, shareholder support, as well as its ability to “positively rationalise” employee numbers and costs.

“Should the group fail to realise the above-mentioned plans and measures, it might not be able to continue to operate as a going concern,” the carrier states.

In its financial results, Garuda also disclosed that it “making efforts” to return 12 CRJ1000s on operating lease contracts, and negotiate the early termination of another six CRJs on finance leases. 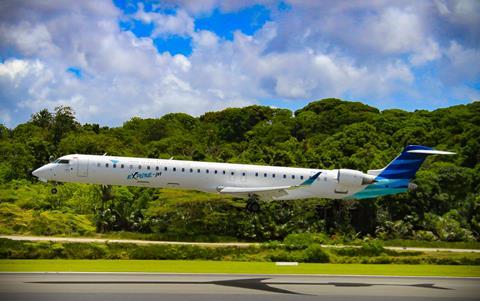 Garuda Indonesia is looking to return a significant number of CRJ1000s.

Cirium fleets data shows the carrier to have a fleet of 18 CRJ1000s, of which 12 are managed by Nordic Aviation Capital. The remaining six regional jets are owned by the carrier. Garuda had previously disclosed only three CRJs were in service during the pandemic.

No further details on other fleet restructuring plans were disclosed in its financial results.

It had been previously reported that the carrier was looking to return a significant number of aircraft to its lessors — up to 50 jets from its fleet of over 140 aircraft.

Separately, a Jakarta-based cargo carrier, My Indo Airlines, has taken the flag carrier to court, over unpaid debt.

Garuda said on 19 July that it received the court order, and would be studying it closely before responding to the proposal.

The carrier did not disclose the quantum of debt owed to the cargo airline, but stressed that the lawsuit — its latest in more than a year — had no impact on its day-to-day operations.

Under Indonesian bankruptcy law, a debtor or a creditor can apply for an order to enforce the suspension of debt payment obligations, allowing them to reach a settlement and avoid bankruptcy and liquidation.