Vietnam’s Bamboo Airways is eyeing stock market listings in both Vietnam and the USA, as tourism company Vietravel reportedly tops up its investment in Vietravel Airlines. 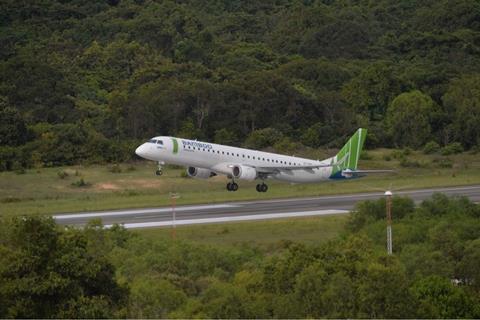 Bamboo Airways is the first E195 operator in Vietnam

In addition, the company hopes to raise $200 million by listing 5-7% of its shares on the New York Stock Exchange.

The carrier adds that it aims to operate regular non-stop flights on the Ho Chi Minh City-San Francisco route by the end of 2021. Initially the service, operated by Boeing 787-9s, will be five times weekly, but this will rise to daily in 2022.

The airline says it also plans to launch services connecting Hanoi and Ho Chi Minh City to London Heathrow by the end of the year.

Vietravel Airlines is based at Phu Bai International Airport, which serves the country’s ancient capital, Hue.

The airline had been started in April 2020, but its operations were severely impacted by the Covid-19 pandemic. It resumed flights on 18 October.

According to Vnexpress, it lost VND90 billion in 2020.

Vietravel Airlines has three A321s, with no aircraft on order.