UK regional carrier Flybe, which was beset by financial woes, has ceased operations and filed for administration.

“All flights have been grounded and the UK business has ceased trading with immediate effect,” it adds. 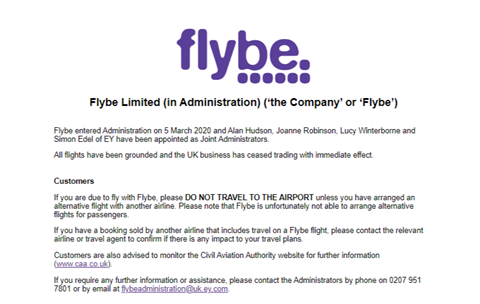 A screengrab from Flybe’s website confirming that it has ceased operations.

The latest news came hours after media reports in the UK suggested the carrier was to file for administration after completing its last flights on 4 March.

The UK government had rejected Flybe’s request for a £100 million ($129 million) loan, reports indicate. Meanwhile, financial pressure had increased on the carrier in recent days as air travel demand was impacted by the coronavirus outbreak.

The carrier appeared to be on the brink of going under in January, before a deal brokered with the UK government prompted investors to pump fresh, limited funding to the struggling carrier.

Following Flybe’s collapse, two of its franchise partners, Eastern Airways and Blue Islands, have said their services will continue to operate.

In a post on its official Twitter account, Eastern says its services were unaffected. All passengers who have booked Flybe flights operated by Eastern for the rest of the week should “turn up and travel as normal”, it adds.

A notice on Blue Islands’ website states: “Blue Islands services will continue to operate as normal, following the closure of Flybe.”

Meanwhile, the UK Civil Aviation Authority has weighed in on the collapse, calling it a “sad day” for UK aviation. It urged customers to make their own alternative travel arrangements in light of Flybe’s collapse.

All Flybe flights are cancelled. Please do not go to the airport as your Flybe flight will not be operating.

For flights operated by franchise partners, passengers should make contact with their airline.#Flybepic.twitter.com/O9vQ7mvnR8

The UK Department for Transport, meanwhile, adds that it is working with the airline industry to “minimise any disruption to routes operated by Flybe, including by looking urgently at how routes not already covered by other airlines can be re-established by the industry”.

“Through the reviews of regional connectivity and airport passenger duty we have announced, we will bring forward recommendations to help ensure that the whole of the UK has the connections in place that people rely on,” the department adds.

UK government statement in response to the collapse of Flybe: pic.twitter.com/8PkjhqKhJg

Exeter-based Flybe had been planning to rebrand as Virgin Connect, operating as a feeder service for Virgin Atlantic long-haul flights.

While the cut-price deal was announced in January 2019, the consortium did not receive European Commission clearance for the acquisition until July 2019. The delay, coupled with other factors, impacted the delivery of the consortium’s turnaround plan – reportedly to the tune of £9 million – for Flybe.

Flybe, which was established as Jersey European Airways and later became British European, operates a fleet of over 60 Bombardier Q400 turboprops and Embraer E-Jets.

Story updated with statement from UK Department for Transport.