London-based freighter specialist CargoLogicAir is unaffected by the UK government’s decision to prohibit Russian carriers from its airspace.

In response to the invasion of Ukraine by Russian forces, the Department for Transport (DfT) on 25 February issued a NOTAM which bans from UK airspace any “aircraft which is owned, chartered or operated by a person connected with Russia, or which is registered in Russia”. 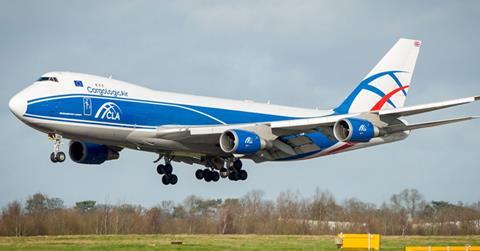 “The Department will investigate any potential breaches of the NOTAM banning all Russian-owned aircraft if we have information which suggests this could be the case,” it adds, pointing out that CargoLogicAir is “a UK-registered airline”.

As the DfT notes, CargoLogicAir is a UK-registered business with an air operator certificate (AOC) issued by the country’s Civil Aviation Authority. It operates a pair of Boeing 747-400 Freighters, both on the UK register (G-CLAA/G-CLBA).

Flight-tracking site FlightRadar24 shows the two jumbo freighters as having made numerous flights to Europe, the Middle East and North America over the past week. G-CLAA departed for Los Angeles from East Midlands airport on 4 March, while its sister aircraft on 3 March arrived at London Heathrow after a service from Atlanta.

CargoLogicAir describes itself as “The Great British Cargo Airline”.

CargoLogicAir’s accounts reveal that the “ultimate controlling party” of the business is Alexey Isaykin, through his 100% stake in parent Cargo Logic Holding, another UK-registered company.

Volga-Dnepr Group includes cargo carriers Volga-Dnepr Airlines, AirBridgeCargo and Atran – all of which are banned from UK and European airspace.

Other companies within the Volga-Dnepr Group – described as “related parties” of CargoLogicAir – also guarantee lease agreements covering the UK firm’s fleet, or have provided loans, according to the accounts of Cargo Logic Holding.

CargoLogicAir did not respond to multiple requests for comment.

Sister company CargoLogic Germany, which has a small fleet of 737-400 freighters, also continues to operate from its Leipzig base.