Cathay Pacific will defer delivery of its Airbus aircraft by up to two years, and is in “advanced negotiations” with Boeing about delaying the delivery of the 777-9 widebody, in a bid to “produce cash savings” in the short to medium term.

The deferrals on Airbus aircraft, announced in a rights issue prospectus, will affect A350-900s and A350-1000s, as well as sister carrier Cathay Dragon’s A321neos. 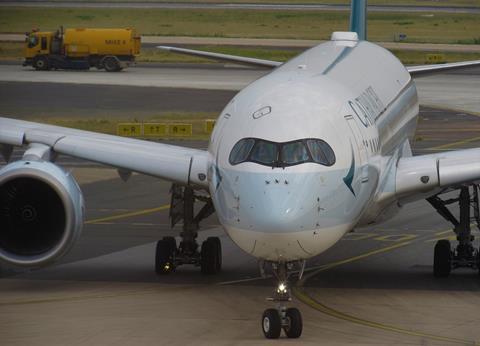 Cathay stated in a November investor presentation that these aircraft were expected to enter the respective fleets by 2024.

The beleaguered carrier, which recently warned of a HK$9.9 billion ($1.28 billion) net loss for the six months ended 30 June, says that its monthly cash loss has reduced slightly after it took measures to cut costs and conserve cash.

From an initial cash loss of HK$2.5 to 3 billion a month disclosed in June, the carrier states that it has now gone down to HK$1.5 billion a month, and is expected to remain at that level for the foreseeable future.

Cathay, Cathay Dragon and HK Express have been hard hit by the collapse in travel demand from the coronavirus outbreak. HK Express remains grounded, while Cathay and Cathay Dragon carried only 27,106 passengers – a 99.1% decline year on year.

The carrier said that the recapitalisation plan was drawn up after exploring “available options”, and adds that it was necessary “to ensure it has sufficient liquidity to weather this current crisis”. Cathay’s management will also re-evaluate its business model in the longer term, and will, by the end of the year, make recommendations to its board on the “optimum size and shape” of the group.