Cathay Pacific expects to take delivery of two more Airbus A321neos by the end of the year, as it gears up for the type’s maiden service in August to Shanghai Pudong.

Taken together with the four existing examples it has now, Cathay’s A321neo fleet by the end of the year will be six jets. The Oneworld carrier also expects all 16 A321neos on order to be delivered by end-2023, about two years earlier than forecast. 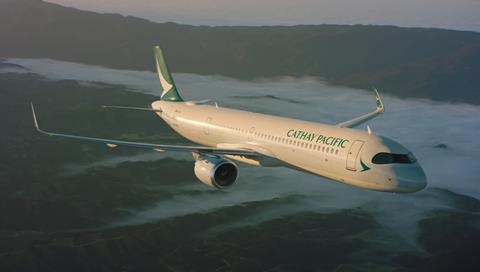 Cathay Pacific now has four A321neos in its fleet.

Cathay also disclosed other destinations that it will deploy the type on in August, including to Guangzhou, Hangzhou and Nanjing in Mainland China, as well as to Kaohsiung and Taipei in Taiwan.

The A321neos were originally meant to operate with now-shuttered regional unit Cathay Dragon. Cathay placed an order for 32 examples in 2017, meant to replace Cathay Dragon’s fleet of A320s and A321ceos.

In late-2019, Cathay rejigged its A321neo order, shifting half of the orderbook to low-cost arm HK Express instead.

Then in 2020, as the coronavirus pandemic impacted travel demand — and Cathay’s financial situation — the carrier announced it was deferring its orders for up to two years till end-2025. Cathay would later shut the Cathay Dragon brand, as part of restructuring measures to stay afloat amid the pandemic, and absorb the latter’s A321neo order book.

The aircraft is configured to seat 202 passengers, with 12 business class seats and 190 economy class seats. Cathay is also touting a refreshed regional cabin product for both classes.

Separately, the carrier discloses that it will increase its fleet of passenger aircraft modified to carry cargo.

It is in the process of converting two more Boeing 777-300ERs into cargo-only aircraft by removing seats, bringing the total number of such aircraft to six examples.

The move will help the carrier meet an anticipated surge in cargo capacity in the coming months, the carrier states.