Troubled Cathay Pacific Group took a one-time HK$2.8 billion ($361 million) impairment charge relating to the early retirement of 34 aircraft, as it disclosed that nearly half of its fleet is in long-term storage overseas.

In its financial results for the year ended 31 December 2020, Cathay group chairman Patrick Healy says 92 passenger aircraft — or about 46% of its fleet — have been moved to Alice Springs in Australia, as well as Ciudad Real in Spain for long-term storage. 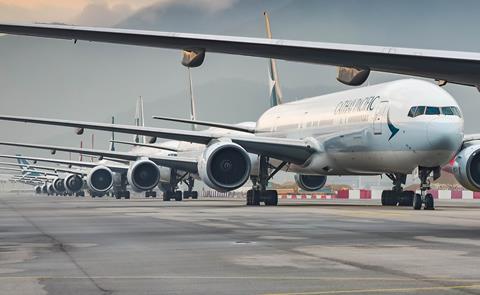 Cathay Pacific Group has moved nearly half of its fleet overseas for long-term storage.

The latest disclosure is a slight upward adjustment on previously-reported figures. In August, it was reported that the group would move about 40% of its fleets to long-term storage overseas, as it adjusted its capacity downwards.

On the early aircraft retirements, Cathay did not disclose which aircraft these were, but notes that these aircraft were removed, as they were “unlikely to re-enter meaningful economic service again before they retire or are returned to lessors”.

The group, which plunged to its worst-ever full-year loss, also restated an earlier announcement of aircraft delivery deferrals. Deliveries for Airbus A350-900 and -1000 aircraft have been pushed back by up to two years, from 2020-2021, to 2020-2023.

Cathay states that “advanced negotiations” are still ongoing with Boeing for the deferral of the 777-9 widebody, which it has 21 on order. The group had previously confirmed that the deliveries would be delayed to beyond 2025, and said it was still committed to the type.

The group, which also comprises low-cost unit HK Express and cargo subsidiary Air Hong Kong, ended the year with 239 aircraft in its fleet, an increase of three aircraft from what it started the year with.

An earlier version of the story indicated that Cathay had parked 82 aircraft overseas. The carrier has clarified that the number of aircraft in storage overseas should be 92, instead of 82.