Cebu Pacific has taken delivery of its first A330neo, with the carrier emphasising the environmental credentials of the aircraft.

The carrier points out that its A330neos are equipped with 459 Recaro-produced seats in a single-class layout, and claims that this gives it the lowest carbon footprint per passenger.

“Cebu Pacific’s first A330neo brings us closer to our target of having an all-Neo fleet by 2027, and shows our commitment to making air travel accessible, while ensuring environmental and social sustainability,” says chief strategy officer Alex Reyes.

“We believe that growth and sustainability are not mutually exclusive and should in fact be inclusive if we want to work towards the greater good. This is why we will always choose the greener options – increased aircraft efficiency, reduced noise and carbon emissions, to ensure that more low fares will be available for [everyone]” Reyes added.

The carrier estimates that the A330neo – powered by two Rolls-Royce Trent 7000s - will use 25% less fuel than previous generation aircraft, and will consume “as little as” 1.4kg (3lb) of fuel per seat per 100km.

Airbus adds that Cebu Pacific’s overall orderbook is for 16 A330neos. In addition, Cebu Pacific has orders for 16 A320neos and 22 A321neos. 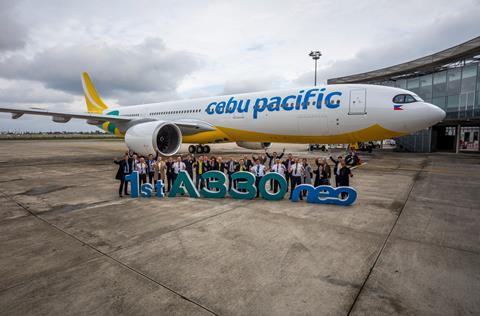 The Airbus, Avalon, and Cebu Pacific teams with the carrier’s first A330neo in Toulouse

Cirium fleets data suggests that the Cebu Pacific delivery marks the 14th A330-900 delivery to an Asia-Pacific operator.