Amid a pandemic might seem an unusual time to launch a start-up airline.

But the Covid-19 era has created opportunity by deflating aircraft lease rates to levels at which new players can acquire jets at fire-sale prices, say aerospace analysts.

For that reason, launching a new airline now – as several US companies are doing – might actually make some sense.

“There’s been some very creative lease structures… but overall rents have plummeted,” says George Dimitroff, head of valuations at Ascend by Cirium.

Breeze already has three E190s leased from Nordic Aviation Capital and two E195s leased from Elevate Capital Partners. The jets are seven to 14 years old, according to Cirium data.

On 8 April, another upstart called Avelo Airlines announced plans to begin scheduled flights on 28 April. Led by former Allegiant Air and United Airlines executive Andrew Levy, Avelo intends to begin operations with three Boeing 737-800s, expanding the fleet to six of the jets by year-end. Avelo has not said how it will acquire the jets. However, Avelo’s affiliate company XTRA Airways has one leased and two owned 737-800s in its fleet, according to Cirium.

Also on 8 April, a Massachusetts aviation company said it plans, in October, to launch flights using De Havilland Canada Dash 8-400s under the name Connect Airlines. From where Connect intends to acquire those turboprops remains unclear.

But lease rates are certainly attractive. 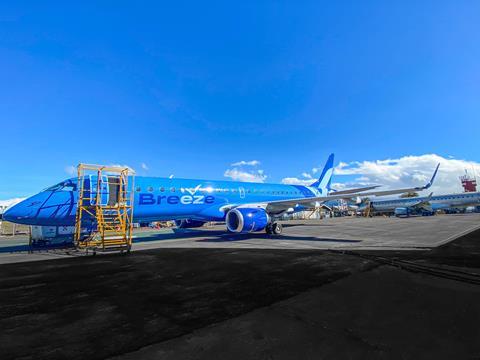 The first Embraer 190 regional jet in Breeze livery, on 4 February 2021

Rates for new-generation narrowbodies like A321neos and 737 Max 8s also slipped last year, though not nearly so much – only about 10-13%, data shows. Those jets’ lease rates were already somewhat depressed prior to the pandemic, Cirium adds.

Several Covid-19-related factors have made jets cheaper to rent, chief among those being oversupply.

Last year, airlines grounded more than half the global fleet. Carriers have since brought thousands of jets back to service – but they are tending not to fly those jets nearly as frequently as during the fast-growth years prior to Covid-19.

During the pandemic, some aircraft leases expired, meaning lessors took back jets that proved “very difficult to remarket”, says Dimitroff.

Storage, insurance, maintenance and financing fees on unplaced jets add up, leaving leasing companies with every incentive to get jets into customers’ hands, even at bargain rates.

“Lessors want to get the airplanes out and flying as quick as possible, out of the desert. You are losing money when you have the aircraft parked,” Arvai says.

The pandemic led a number of carriers into bankruptcy, through which some succeeded in replacing previous lease agreements with new, more-favourable deals, Dimitroff notes.

Even some airlines that avoided bankruptcy managed to negotiate better lease deals.

“Airlines that have been really wobbly have said, ‘We need a… reduction. Or, you can come and take your aircraft back,’” Dimitroff says.

The pandemic spurred lessors and airlines to hammer out compromises – deals that kept jets in airline fleets while helping carriers weather the storm. 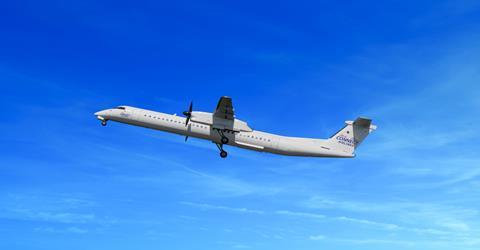 Such deals have included generous initial terms, like “rent holidays” – periods, perhaps lasting six months, when airlines pay little or nothing for leased aircraft. Or, for a short period, carriers might pay “power-by-the-hour” rates based on how much they fly an aircraft.

In return, airlines might agree to extend the terms of their leases or to other provisions that allow lessors to “get the value back at the end of the lease”, Dimitroff says.

Whether cheap monthly payments will be enough for new entrants to survive during a pandemic, and against intense competition from major carriers, remains open for debate.

Arvai notes that Neeleman has the experience to make new airlines work. Levy, too, has proved his chops.

Still, now might be just a bit too early, says Arvai.

“It’s the right time to do all the planning… to get things started and to do the ground work,” he says. “But we are not there yet in terms of traffic.”