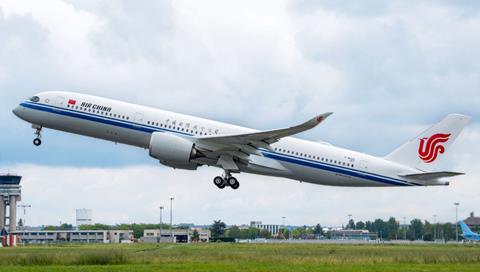 The ‘Big Three’ also warned that their financial performance for the quarter ended 30 September — due to be released soon — will be “materially and adversely affected”, contradicting analyst indications that a full domestic recovery could push Chinese carriers back into profitability.

For the month, Air China carried 7.78 million domestic passengers, a 1.3% increase year on year. It also represented a 7% rise from August’s passenger numbers.

Overall, the Star Alliance carrier carried 7.82 million passengers across its network for the month, 6.9% higher than August’s figures, but a year-on-year decline of 16.6%.

Domestic ASKs for the month rose 5.6% year on year, and increased 4.6% compared to August. RPKs, meanwhile, inched up 0.1% compared to the same period last year. It also grew 9.2% month on month.

China Eastern carried 8.9 million domestic passengers in September, a 1.2% increase year on year and a 5.1% increase month on month. It carried nearly 9 million passengers across its network for the month, a 14% year-on-year decline.

The SkyTeam carrier also reported the highest year-on-year increase in domestic ASKs among the ‘Big Three’ — at 8.5%. Month on month, domestic ASKs grew 2.5%.

September’s traffic results caps off months of steady improvement in domestic traffic in China, after authorities announced that the coronavirus outbreak — which originated in the country — had been brought under control.

Chinese airlines also carried more than 13 million passengers across the recent Golden Week holidays in early October, with the number of flights mounted during the period close to pre-pandemic numbers.