This will take the form of a seven-year unsecured bond that will be converted to new shares at maturity. 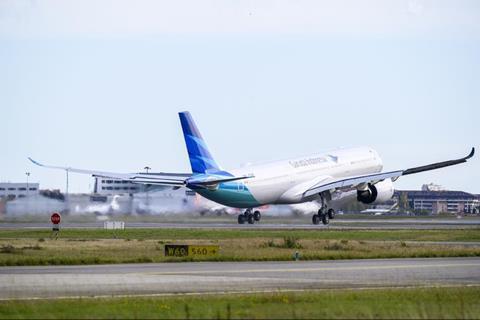 Garuda Indonesia says government funding is necessary for it to strengthen its capital structure in order to maintain business operations.

“The proceeds from the transaction will be used to support the liquidity and solvency of the company, specifically used to finance the company’s operations,” the flag carrier says in a stock-exchange disclosure released on 14 October after market hours.

The company is calling for an extraordinary general meeting on 20 November to seek shareholder approval for the mandatory convertible bond and expects to announce the outcome on 24 November.

While it has yet to specify the bond denomination, Garuda states that the number of converted shares will be determined by the principal divided by the conversion price.

Pro forma projections against 13 October’s close indicate a Rp206 conversion price, yielding 41.3 billion new shares that Garuda will issue to the finance ministry. This will increase the number of shares issued from 25.9 billion to 67.1 billion.

The government, which currently holds 15.7 billion shares in the airline, equivalent to a 60.5% stake, will have its shareholdings increased to 56.9 billion shares, amounting to 84.8% of the expanded shares outstanding.

The airline states: “The participation of the Government of the Republic of Indonesia (as the majority shareholder of the company) as a potential investor is necessary given the strategic role of the company in Indonesia’s economic growth in the future, both as a support for the connectivity of goods and passengers in Indonesia and abroad which is crucial in equitable distribution and driving economic growth.”

The bonds will bear semi-annual coupons, payable every 31 March and 30 September, subject to the company’s interest coverage ratio on each coupon payment date.

If its interest coverage ratio is more than one – which would indicate that available earnings can cover current interest payments – the bonds will pay a coupon rate equal to the effective Seven-Day Reverse Repo rate on the coupon payment date. The rate, currently 4%, is published monthly by the Indonesian central bank.

The bond pays no coupon if the company’s interest coverage ratio is less than one.

Garuda says the funding is necessary for it to strengthen its capital structure in order to maintain business operations.

As at 30 June, the company’s liabilities were recorded at $10.4 billion, exceeding asset value of $10.3 billion. This resulted in a negative balance of $80.8 million in equity value, versus a $2 billion equity value as at 31 December 2019.