Brazil’s Gol continues to suffer from the fallout of the grounding of its seven Boeing 737 Max aircraft, reporting fourth quarter net income that was almost half of that reported for the same period in 2018.

Net income in the fourth quarter fell 47% to R352 million ($80.1 million) from R675 milllion, even as revenue rose 18.8% to R3.8 billion in the quarter. Chief executive Paolo Kakinoff attributed the revenue increase to the company’s low-cost model and “sophisticated fleet management”. 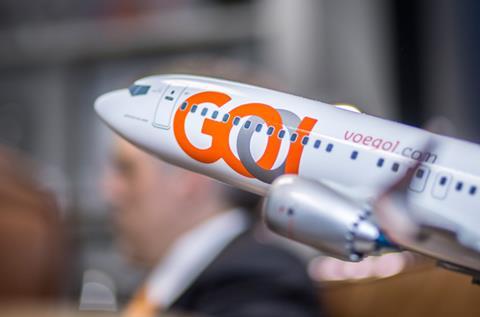 While the airline is still Brazil’s largest in terms of market share, it has been unable to benefit from the more efficient new-generation Max aircraft in its network. The aircraft’s grounding is in its 12th month, and it is not expected to return to revenue service until the second half of the year. Kainoff says Gol is planning for its Max fleet to return to operation between July and August.

“We have seven Max planes grounded here in Brazil, plus 12 in Seattle already available to fly to Brazil and come into service,” Kakinoff says. “We do not know how much time it will take for Boeing to unground all those planes. By the end of the year, the airline is expecting at least those seven aircraft back, in addition to about 15 more. So by the end of 2020 the Max fleet will be around 20 units out of a total fleet of 140 aircraft altogether,” he added. Gol ended 2019 with a Boeing 737-only fleet of 137 aircraft altogether,

Over the next four to five years, the airline plans on having “roughly half” of all of its fleet as Max aircraft, chief financial officer Richard Lark adds. “We are in a holding pattern now, sourcing our capacity on an incremental basis every month, with aircraft coming from a lot of different places as they are available.”

He added the company has been able to lease numerous aircraft to cover capacity shortage during the country’s peak travel season, which ends after the traditional Carnival holiday in late February, and that it remains flexible with the timing of those leases. “Our partners are working with us closely to match their ability to replace the NGs out there as the Max comes back to service.”

Two weeks ago, Gol announced a codeshare partnership with American Airlines after Delta sold its 9.2% stake in the carrier in December. As a result of the tie-up, pending regulator approval, Gol customers will gain access to more than 30 US destinations from Sao Paulo, Rio de Janeiro, Brasilia and Fortaleza. The new partnership will double its capacity to the USA, Kakinoff says. Demand for these flights remains high, and the airline does not expect a decline in interest in these flights as a result of the partnership.

“Revenue-wise, the day after the replacement we already had the same amount of revenue sourced by this partnership, it can only get better,” Kakinoff says.

In addition, Gol says it signed a new codeshare agreement with Colombia’s Avianca which includes 60 domestic Brazilian destinations and 16 international destinations in 11 countries and 26 Colombian destinations as well as another 50 in the Americas and Europe.