Revenues in the three months ended 30 September climbed 45.4% to Rs19.5 billion, while net losses widened to Rs8.4 billon from Rs5.6 billion, according to the carrier’s second quarter financial statement. 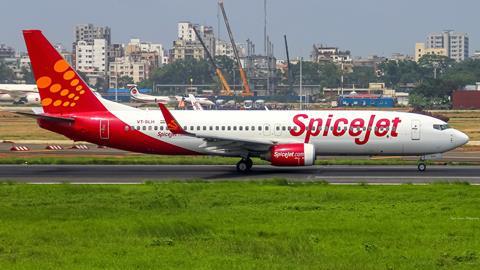 The company attributes its weak results to the decline in the Indian rupee against the US dollar, high fuel prices, competition pressures, as well as the residual impact of the coronavirus pandemic.

In the second quarter expenses rose 50% year on year to Rs29 billion, with fuel expenses doubling to Rs12 billion.

In specific business areas, passenger air transport service revenue more than doubled year on year to Rs17.4 billion. Cargo revenue, however, dropped by more than half to Rs2 billion.

As or 30 September, cash and cash equivalents stood at Rs79 million, compared with Rs441 million a year earlier.

“These conditions and other matters…indicate the existence of material uncertainties that may cast significant doubt about the company’s ability to continue as a going concern,” says Walker & Chandiok.

SpiceJet, for its part, says it is in discussions with banks to raise funds, and also believes it can eventually earn a profit.