IATA is pointing to a strong response from airlines to its recently launched 25by2025 initiative on improving female representation within senior leadership teams across the industry.

The airline body launched the voluntary initiative in the autumn as part of efforts to improve gender diversity. Specifically it is encouraging its airline members to sign up to a commitment to increase the number of women in senior leadership positions and under-represented areas by 25% – or to a minimum of 25% – by 2025. 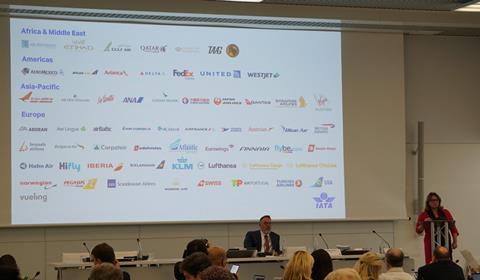 Speaking at IATA’s global media day in Geneva in December, IATA’s director of learning and development Jane Hoskisson said the take-up from airlines had beaten IATA’s initial expectations. “I didn’t expect to be saying today we have 59 airlines signed up. That’s 30% of global traffic,” she states.

”We have a heavy domination of European airlines and one of the reasons for that is our European colleagues had an event in Berlin in November. We had 29 airlines represented signing up [at the event],” Hoskisson says. “But it’s not just limited to Europe or to big airlines.”

The issue of under-representation of women within airline senior leadership teams has been a high-profile one at recent IATA AGMs, not least because of the male dominance evident among IATA’s board of governors. That board comprises airline chief executives. Notably during a conference session, Air New Zealand’s then-chief executive Christopher Luxon challenged the industry to do more to advance gender diversity.

Hoskisson states: “We came out of the AGM in June and said we need to do something, what does that look like? This isn’t about making gender balance a priority, this is about what are the opportunities we are missing as an industry to get more women and get a better balance of diversity across the industry.

”Let’s encourage the airlines to aim for 25% female representation. Now some airlines have already achieved that,” she notes, adding that for some airlines “that’s going to be a really big challenge”. So for those carriers, a nearer-term target is to take their current metric and increase it by 25%, rather than aiming for women accounting for 25% of senior executives.

“One of the things we are using this to do is to get a better picture of what are the airlines doing, so we are going to be reporting on those metrics on an annual basis – so we can provide a more cohesive view of what is happening on a gender and diversity point of view across the industry,” she adds.

Airline Business’s annual survey of female representation within senior leadership of the biggest airlines and groups illustrated the scope of the challenge. Overall, of the 600 senior executive roles surveyed in June 2019 – covering chief executive, chief financial officer, chief operating officer, chief commercial officer, chief information officer and HR director, or their equivalents – some 76, or 13%, were taken by women. This compares with 72, or 12%, at the same point in 2018; and 65, or 11%, at the same point in 2017.

”At the beginning of [this] year we will be launching a forum where airlines can share information, because 59 airlines – and I would love to think we could get it quite a lot higher next year – will have great experiences to share,” says Hoskisson.

“In May we will be holding a round-table in Paris where we start looking at what tangible actions can we take as an industry to support us on this journey, and the middle of the year will be the first time we do our benchmarking of where does the industry stand currently. This will be a good opportunity to say ‘where are we’ because by 2025 we want to show progress.”

Hoskisson adds that other elements of diversity are not being ignored, despite the initial focus on improving the gender mix.