Japanese regional operators Air Do and Solaseed Air will merge by 2022, in what appears to be the first signs of consolidation in the country’s airline market in recent years.

Both carriers on 31 May inked an agreement to set up a joint holding company, with the consolidation targeted to be completed by October 2022. In the interim, a “business alliance” between both parties has been established. 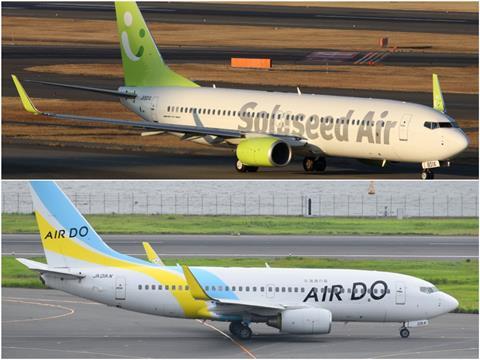 Air Do and Solaseed Air will merge by October 2022.

More details of the newly-established joint holding company will be disclosed after further discussions, they add.

It appears that the two carriers will continue to retain their distinct brands post-merger. However, both Solaseed and Air Do will “aim to further reduce costs by standardising operations” and streamline their organisation structure.

The merger comes amid an unprecedented collapse in travel demand from the coronavirus pandemic, consequently impacting their profitability.

“In order to quickly recover the damaged financial base of both companies, survive the new business environment, provide more added value to customers, and achieve sustainable growth…the … cooperative relationships between the two companies will be further deepened,” a joint statement read.

Both carriers also warned that it will “take some time” before they would be able to return to pre-pandemic profitability.

Japan’s Nikkei Asia Review first reported on 13 May that the two airlines were set to merge by 2022, though neither Air Do nor Solaseed had publicly confirmed the reports.

The merger — subject to shareholder approval — will be the first major consolidation among two Japanese carriers in more than a decade. In 2001, Japan Airlines announced the acquisition of its rival Japan Air System, which at the time was the country’s third-largest carrier.