Chinese carrier Juneyao Air was loss-making in 2020, much like its larger, state-owned compatriots, which have also saw their profitability punished by the impact of the coronavirus outbreak.

In its full-year results, the Shanghai-based airline swung to an operating loss of CNY749 million ($115 million). This compares to the CNY1.29 billion operating profit it reported in 2019. 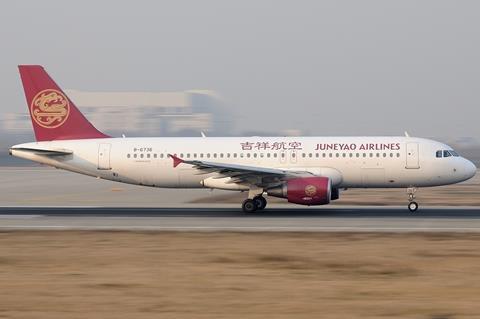 Juneyao Air was loss-making in 2020, as the coronavirus outbreak depressed travel sentiment.

As with other carriers in the country, a collapse in passenger travel demand — particularly in the first half of the year — meant that revenue declines outpaced a reduced costs.

Despite swinging to a full-year loss, Juneyao says it is optimistic of domestic prospects, even though it was not of the same size as its larger competitors.

Noting that China, where the coronavirus was first discovered, has the pandemic largely under control, Juneyao adds: “Judging by the growth trend of passenger traffic in China’s aviation industry in the past 10 years, the country’s civil aviation market, especially first- and second-tier cities, will continue to grow in the future, and the market potential is still huge.”

With domestic competition heating up, the carrier notes that what would set it apart from its rivals would not solely be on price, but on what it called “service innovation” and “differentiated operations”.

The carrier discloses that it will continue to adjust and optimise its fleet according to market conditions.

In its fleet plans, the carrier states that it will focus on the A320neo family, which it believes gives it a “strong competitive advantage” on trunk domestic routes. The A320neo and A321neo aircraft will help meet “developmental needs” in the short to medium term, it adds.

As for its widebody fleet, Juneyao expects to take delivery of two more 787s this year. It notes that it was “crucial” to identify intercontinental routes with strong yield.