The engine producer will respectively supply PW1100Gs and PW1900Gs to equip up to a combined 30 of the airliners, the companies announced at the Bahrain International Airshow on 9 November. 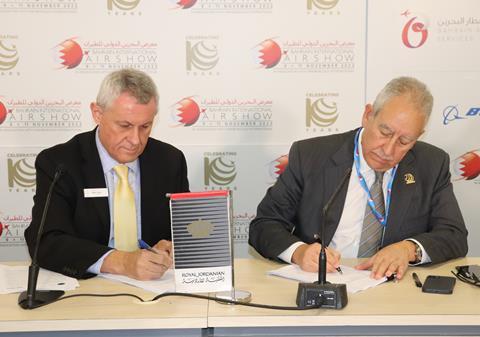 Samer Majali, chief executive of the Amman-based carrier, says replacing its current fleet of narrowbodies and regional jets within the next three to five years will enable it to benefit from the GTF design’s “industry-leading efficiency”.

Royal Jordanian in early October selected the Airbus single-aisle for an up-to 20 aircraft need to replace its current A320ceos, without disclosing an engine selection. Days later, it also announced a plan to operate up to 10 new E-Jet E2s.

Majali says Royal Jordanian will field 12 A320neos in a 150-seat, two-class configuration including 12 in business-class, and three all-economy examples of the same model, each capable of accommodating 180 passengers. It also will take five A321neos.

All the aircraft will be sourced from lessors, he says, noting: “We would have liked to have purchased some, but the earliest deliveries that Airbus could give us were beyond 2028.”

The carrier also will introduce up to six E190-E2s and four E195-E2s. Majali says eight will be leased, with the last two to potentially be purchased by the airline.

The propulsion deal with P&W has a list price value of around $500 million, with an associated “long-term, comprehensive service agreement” worth up to an additional $1 billion.

“Aircraft deliveries are expected to begin in late 2023,” the engine supplier says.

Royal Jordanian’s modernisation plan also includes an intention to boost its Boeing 787 fleet from seven to 11, with the -8-model operator interested in both the -9 and -10 versions.

“As we introduce the [new] narrowbody and regional jet fleet, that will allow us to provide a stronger feeder network that will support additional widebodies,” Majali says.