Ryanair exceeded its pre-Covid passenger numbers by 14% – or almost 2 million – in October this year, while rival Wizz Air reported traffic up by 22%, or around 800,000 passengers, on the same basis.

The two European low-cost carriers tend to be the first airlines in the region to release traffic figures each month, giving an early indication of air travel demand for the period, albeit at operators that have pursued post-pandemic capacity growth much more aggressively than peers.

Ryanair’s passenger numbers peaked at 16.9 million in August this year amid strong capacity growth in the pandemic recovery period. That figure was two million up on the 14.9 million served in August 2019.

Wizz Air, meanwhile, served 4.5 million passengers in October this year, versus 3.7 million in the same month of 2019, it said on 2 November. The latest passenger figure is a rise of 1.5 million from the number served in October 2021. 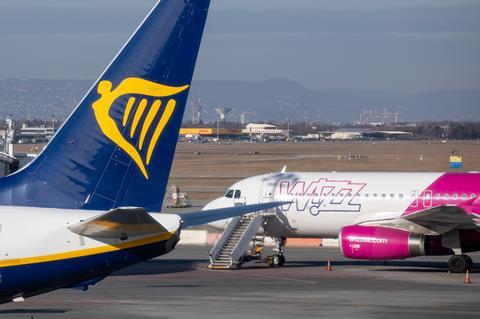 Wizz’s load factor of 88% compares with 95% in October 2019, but represents an eight percentage point rise from October last year.

The budget carrier’s passenger numbers peaked in August this year at 5 million – 1 million up on the number served in August 2019.

For the calendar year to date, Ryanair’s passenger numbers of almost 138 million are around 100 million higher than those for Wizz Air, although the latter leads in terms of proportional growth versus 2019 traffic, at 13% versus 6%.