The Rolls-Royce Trent 1000-powered aircraft is on long-term lease to the start-up airline, the lessor says in a 31 March statement. 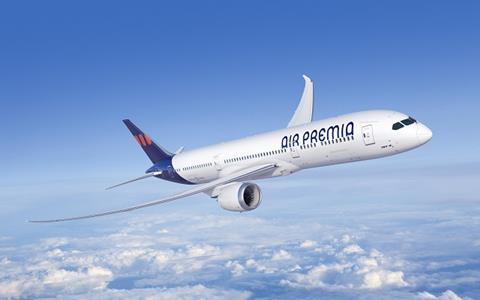 A rendering of Air Premia’s Boeing 787

This is the first of three 787-9s ALC will deliver to the startup carrier this year, from the lessor’s orderbook with Boeing.

ALC’s executive chairman Steven Udvar-Házy states: “As the first aircraft in the Air Premia fleet, this ALC Dreamliner will launch the new airline’s international network and contribute to an excellent debut in the Korea marketplace.”

Air Premia secured its business license in March 2019 and originally had two years to complete the process of securing an air operator’s certificate.

As part of broad measures to support the local aviation industry, South Korea’s Ministry of Land, Infrastructure and Transport has given Air Premia – as well as other carriers in a similar situation – until the end of this year to launch operations, according to a 3 March statement by the ministry.