Embattled Thai Airways has put up its entire Boeing 747 and its 777-200/300 fleet up for sale, as it aims to raise cash amid a long-drawn business rehabilitation process. 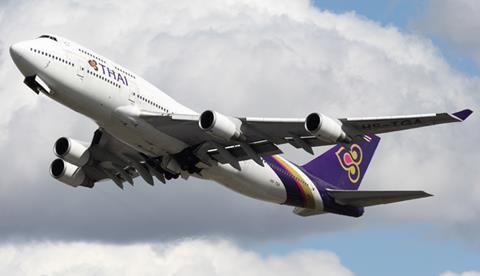 Thai states that the aircraft offered for sale are on an “as-is, where-is” condition, with most expected deliveries to take place in the second quarter of next year.

Cirium fleets data shows the carrier has only 11 aircraft in service, with 85 in storage. Thai has a varied fleet, ranging from A330s, A380s and 787s.

Thai filed for business reorganisation in May, as it acutely felt the impact of the coronavirus outbreak. Already in a precarious financial situation, the pandemic saw travel demand collapse, and widened the airline’s losses.

Thailand’s central bankruptcy courts gave the troubled carrier the green light to reorganise in September, allowing it to appoint its rehabilitation organisers.