The airline is making the move “in support of the [Covid-19] containment efforts by the government of Thailand”, Thai Airways says in a 19 July filing to the Stock Exchange of Thailand (SET). 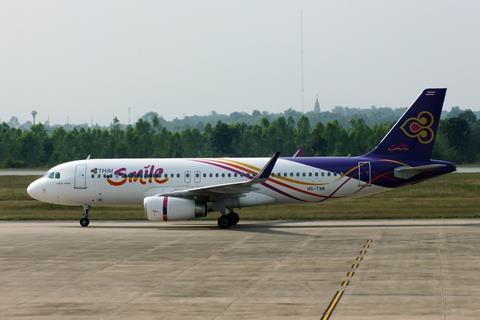 A Thai Smile Airbus A320 at Khon Kaen airport.

Thai Airways itself had already announced the suspension of several domestic routes from the capital Bangkok until September, also in compliance with tightened movement restrictions by the country’s Centre for Covid-19 Situation Administration.

The Civil Aviation Authority of Thailand (CAAT) said in an 18 July statement that it would require local airlines to suspend commercial passenger flights to and from “dark red” zones, which are provinces classified as having the highest infection risk, starting 21 July, in line with travel restrictions imposed on these provinces.

Thai Smile and its parent will continue to evaluate the situation closely and reinstate services as soon as the situation improves, the 19 July SET filing adds.

Meanwhile, fellow Thai carrier Nok Air says in a 19 July SET filing that it is cutting its flight schedule, although it does not appear to be suspending flights entirely.

“According to the government’s call for co-operation to limit the movement of people during [the] current Covid-19 pandemic situation, Nok… is also aware of the need of some people to travel,” it says.

“Therefore the company reduced the operational flight schedule to be in line to meet the required passenger demand in the same way as we have always stood by with fellow Thais. Furthermore, the company also has implemented public health measures to safeguard passengers during their travels and staff safety during their duties with us.”

Nok is undergoing a business rehabilitation process, during which it may continue to operate but enjoy a “stay” on creditor claims. The carrier filed for this in July 2020, taking a similar path to Thai Airways, which filed in May 2020.

Meanwhile, Thai AirAsia has already suspended all domestic flights from 12 July until 31 July “in support of the [Covid-19] containment efforts of the government of Thailand”, according to a 12 July SET filing.

Like Thai Smile, it says it is “prepared to reinstate our services as soon as the situation improves”.

On 19 July, Thailand reported a record number of confirmed Covid-19 cases: 11,784, according to World Health Organization data. The kingdom had fully vaccinated 4.9% of its population, while 15.5% had had a first dose, as of 17 July, Financial Times data shows.