China Airlines plans to inject more capital into low-cost unit Tigerair Taiwan, as part of a move to “optimise the capital structure” of the LCC.

The SkyTeam carrier discloses that it will pump about NT$657 million ($23 million) into Tigerair Taiwan, bringing its total shareholding to nearly 76%. 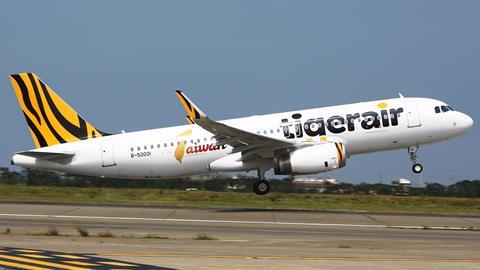 Tigerair Taiwan has a fleet of 11 Airbus A320s.

The latest disclosure follows an August announcement that China Airlines will inject up to NT$2 billion into Tigerair Taiwan, as part of “long-term equity investment”.

In December 2019, Tigerair Taiwan debuted its shares on the Taipei Exchange’s Emerging Stock Board, a preparatory board for the nation’s two main bourses, according to local news reports.

The carrier used to be a 90:10 joint venture between China Airlines and Tigerair, the former Singapore Airlines unit that merged with Scoot. In late 2016, China Airlines purchased the remaining 10% stake from Tigerair, following disagreements over how the carrier was run.

Cirium fleets data indicates that Tigerair Taiwan has a fleet of 11 in-service and stored Airbus A320s, with an orderbook of seven A320neos.