Cirium fleets data shows the South Korean low-cost carrier has 27 Boeing 737-800 jets in its current in-service and stored fleet, each configured with 189 seats in a single-class layout and of 2003 to 2017 vintage. The narrowbodies are owned and managed by various lessors. 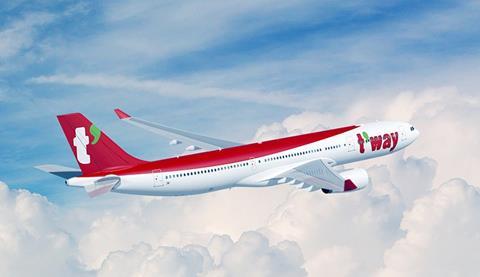 T’way Air first announced a letter of intent for Airbus A330s in December.

The airline is now preparing for the A330’s operational debut, it said in a 2 June statement, by establishing maintenance support and training flight and cabin crew.

It adds that it has completed construction of a training centre at the cargo terminal of Seoul Gimpo International airport and will continue to expand training facilities for the A330s.

T’way Air will deploy the A330s on short- and medium-haul routes initially, and depending on pandemic developments, operate the widebodies to mid- and long-haul destinations such as Sydney, Croatia, Honolulu, and Singapore.

The carrier says it signed the letter of intent for the aircraft in December and completed the lease contract on 16 April. This move will allow it to add business-class seats to its service offerings, while helping it prepare for the post-Covid-19 environment.