Vietnam Airlines low-cost unit Pacific Airlines is facing an existential crisis, but its parent is restricted in its ability to bring in new partners.

According to recent media reports from Vietnam, the unit was a key focus during a recent Vietnam Airlines shareholder meeting. 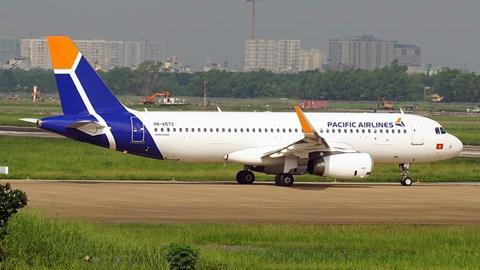 “The shortfall in cash and large overdue debts pose the possibility of insolvency and termination of operations,” Vietnam Airlines is quoted as saying.

FlightGlobal has contacted Vietnam Airlines about the reports, but has yet to receive a reply.

Vietnam Airlines owns 98% of Pacific Airlines. The unit was formerly known as Jetstar Pacific, but in 2020 rebranded back to its original name with Qantas’s divestiture of a 30% stake.

Reports suggest that Vietnam Airlines is eager to bring a partner aboard to improve the unit’s prospects, but that its hands are tied by strict rules around state-owned entities – Hanoi is the majority shareholder of Vietnam Airlines.

Moreover, the substantial losses the unit has accumulated create other legal complications around a sale. One report puts the unit’s cumulative loss at D4.4 trillion ($189 million).

Vietnam Airlines faces its own financial difficulties. In mid-June, it said that it has accumulated losses exceeding D24.5 trillion since the start of the pandemic.