United Airlines will restart non-stop flights to Singapore in January under the city state’s Vaccinated Travel Lane (VTL) scheme, as it hints at more codeshares with Singapore Airlines.

The four-times-weekly VTL service from San Francisco will be operated with Boeing 787-9s from 9 January, says United. The airline formerly operated twice-daily  flights between both cities, but stopped these in March 2020 owing to the coronavirus pandemic. 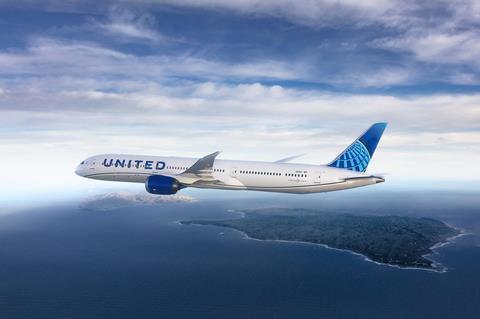 United will operate its San Francisco-Singapore service with 787-9s

The carrier’s launch of the service makes it the second carrier to operate VTL flights between the two countries after SIA.

The VTL scheme allows vaccinated travellers to fly to Singapore and not serve quarantine.

United also states that is “strengthening” its relationship with fellow Star Alliance member SIA, “which will provide codeshare connections to/from United’s services in the future.”

In early November, it emerged that SIA and United had signed a memorandum of understanding about working more closely together, although neither airline provided details.

Traditionally, the two carriers have not worked very closely together. For now, cooperation is limited to SIA placing its code on just eight United domestic flights from Houston, Texas – a city Singapore formerly served via Manchester.

“We’re excited to resume Singapore-San Francisco service to offer our customers in Singapore convenient flight options to the U.S. and beyond, as well as for our increased cooperation with Singapore Airlines,” says Patrick Quayle, United’s senior vice president of International Network and Alliances.

“Our West coast hub in San Francisco can provide our customers with an easy and convenient one-stop connection to more than 70 cities in the US and beyond.”