The US Transportation Security Administration (TSA) has extended the federal mask mandate for air travellers, designed to mitigate the spread of highly-contagious Covid-19.

The mandate, which had been set to expire next week, will be extended for an additional month, until 18 April, upon recommendation from the US public health agency, Centers for Disease Control and Prevention (CDC), TSA says on 10 March. 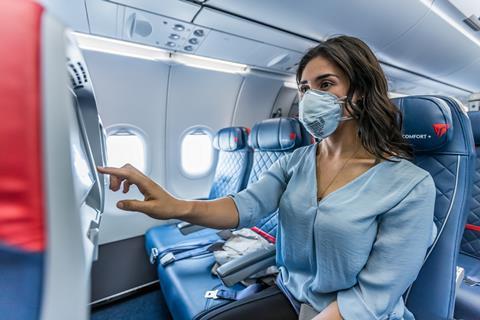 “During that time, CDC will work with government agencies to help inform a revised policy framework for when, and under what circumstances, masks should be required in the public transportation corridor,” TSA says. “This revised framework will be based on the Covid-19 community levels, risk of new variants, national data and the latest science. We will communicate any updates publicly.”

The move comes as many jurisdictions across the USA re-assess their risk levels and have moved to eliminate the face-covering requirement in indoor spaces.

The federal government imposed the national mask mandate in January 2021, months after many US airlines had already introduced requirements of their own.

But the face-covering rule led to a sharp increase in in-flight air-rage incidents. Travellers upset with the requirement have verbally and physically assaulted cabin crew who are tasked to ensure passengers comply with the order.

On 13 January 2020, the Federal Aviation Administration introduced a “zero-tolerance” policy and doubled down on punishments for those airline passengers who refuse to adhere to crew instructions, including the mask requirement, thereby creating a security risk.

Since the policy went into effect, the FAA has received almost 6,800 reports of unruly passengers, more than 4,800 of which were related to mask-wearing. As of 7 March, it had launched 1,340 investigations and initiated 450 enforcement actions which include heavy fines for perpetrators.

So far, cumulative fines levied against belligerent passengers have topped $1.3 million. The highest fine for a single incident was $52,500.