VietJet to raise 15% of charter capital and $300m in bonds

VietJet’s shareholders have approved a private shares placement for up to 15% of its charter capital and a $300 million bond offering.

The Vietnamese low-cost carrier says in a 29 June statement that the moves, endorsed at its annual general meeting, will “guarantee sufficient resource for a safe and efficient comeback of VietJet”. 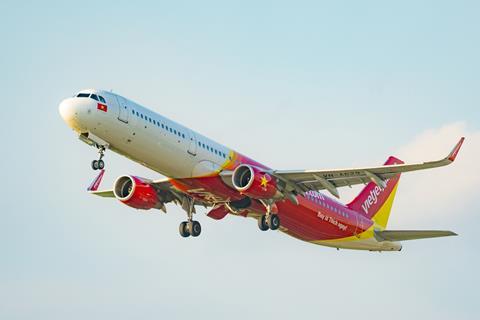 The airline’s charter capital stands at D5.41 trillion ($235 million), according to its 2020 annual report.

In January, VietJet disclosed that it had raised D650 billion from a bond issued in early December 2020.

During the annual general meeting, the airline revealed its revenue targets and strategy for this year, as it plans to focus on domestic growth while anticipating a return of international markets in July.

VietJet expects to increase its consolidated revenue by 20% year on year, to D21.9 trillion, of which air transport revenue will comprise D15.5 trillion.

The growth will be “mainly driven by an exponential increase in cargo revenue, new [air transport services], personnel training and aircraft maintenance and several investments in projects and finance”, says the airline.

It aims to fly up to 15 million passengers across its network, achieving a passenger load factor of 80% and an on-time performance of over 90%.

VietJet is also investing in a technology park to attract aviation activities, as well as increasing its investment in VietJet Aviation Academy, infrastructure, and equipment.

In 2020, VietJet’s parent company generated revenue of D15.2 trillion, of which D1.45 trillion came from air transport. Overall, it made a consolidated profit of D68 billion for the year.