Virgin Australia will re-launch services on the Sydney-Canberra route, but will use Link Airways aircraft and crew for the operation.

The service will commence from 30 January 2022, and operate up to 53 times weekly with Saab 340Bs, says Virgin Australia. 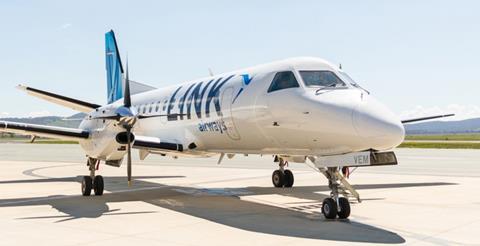 A Link Airways Saab 340B

Virgin Australia has not operated between Australia’s biggest city and the nation’s capital since April 2020, when services were suspended as the coronavirus pandemic crushed air travel.

The carrier adds that the Sydney-Canberra route cannot be served effectively with Virgin Australia’s Boeing 737-800s.

Virgin Australia notes that it has launched 15 new services since September, some of them entirely new for the carrier.

“The service will provide more than 16,000 seats each month between the two cities, which is welcome news for our corporate and leisure customers and particularly those in the government sector who regularly travel to and from Sydney.”

Separately, Air New Zealand reported weak traffic figures for October 2021, a period when the country was struggling with an outbreak of the Delta variant of Covid-19, which affected travel.