Vistara will undergo a change of chief executives, with Vinod Kannan to supersede Leslie Thng as the leader of the joint venture between Air India/Singapore Airlines.

Following four years at the helm of Vistara, Thng will return to a senior role at SIA, says Vistara. 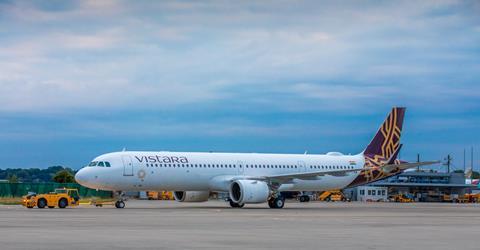 The change will be effective on 1 January 2022.

Both executives are veterans of the SIA Group. Among other senior roles, Thng served as chief executive of SIA’s former regional brand, Silkair.

As for Kannan, before joining Vistara he served as chief commercial officer at SIA low-cost unit Scoot.

“Leslie has led the airline through a significant phase, with the start of international operations and the entry into service of various aircraft including the Boeing 787-9 Dreamliner,” says Vistara chairman Bhaskar Bhat.

“Vinod will lead Vistara in its next phase of growth, building on the strong foundation laid by Leslie. This Company continues to benefit from the strong commitment of the two partners Tata Sons and Singapore Airlines to Vistara.”