All Nippon Airways (ANA) has announced the dates it will begin operating the Boeing 787 on three domestic routes, as well as a livery change for future aircraft.

The carrier will operate the 787 on the Tokyo Haneda-Osaka Itami and Haneda-Yamaguchi routes from 23 January 2012, and the Haneda-Matsuyama route from 1 March, said ANA in a statement.

In addition, there will be a livery change for its third and subsequent 787s. Aircraft delivered in the company's fiscal year 2012, which will end in March 2013, will have '787' painted in bold blue on the forward fuselage. 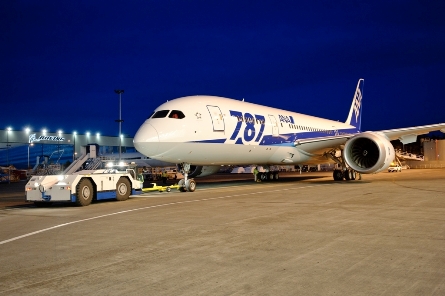 ANA, which has received two 787s, already operates the twinjet on the Haneda-Okayama and Haneda-Hiroshima routes. It will launch on 21 January the first 787 international service on the Haneda-Frankfurt route.

Boeing is scrambling to hand over three more aircraft before the end of 2011. However, the slow pace of deliveries has already affected ANA's commercial deployment of the type.

Airplane 31, registration JA805A, which is the next aircraft in line for delivery, entered customer flight evaluations on 21 December. It flew on 5 December for the first time and then undertook further Boeing crew production flights, including one on 9 December that resulted in a declared emergency for what is believed to be an issue with the aircraft's flaps.

The 787 was due to be handed over in November, but ANA announced a delay citing "productivity reasons", while Boeing said there was a need to "incorporate design changes on assembled" aircraft.