ANALYSIS: A look into Comac and its C919 ambition

In a hangar at its Shanghai Aircraft Research and Design Institute near the new Pudong area, sits an almost complete C919 iron bird test bench.

In the past year, engineers have installed over 90% of the necessary structures and systems onto the test rig, as the Chinese airframer gears towards an end-2015 first flight target for the narrowbody programme.

Over at its final assembly centre near Shanghai’s Pudong International airport, Comac shows Flightglobal, in an exclusive tour, the first C919 forward fuselage manufactured. The aluminum-lithium alloy structure is also the first major C919 structure to be delivered, and sits ready for final assembly.

This is a drastically different scene from two years back. Then, Comac had no iron bird to speak of and first metal was long months from delivery. The ground where its final assembly centre now stands, was no more than a dusty construction site.

Today, things are visibly different. The bulk of the construction work on the assembly centre has been completed and Comac’s upbeat employees are attired in crisp uniforms. They are under pressure, but excited about making progress with a high profile patriotic endeavor. Despite doubts among western experts about the ARJ21, they are proud that it will soon receive Chinese certification.

It is important to remember that Comac is only eight-years-old. It was set up in May 2008 with key businesses drawn from state-owned AVIC, following a 2007 government decision to develop China’s first large commercial airliner.

The company has since grown to a staff strength of over 9,000 employees, up from 3,800 in 2008. These include over 800 experienced foreigners brought in specifically to help Comac in various aspects of the aircraft manufacturing process.

“We’re giving them some technical requirements. The first stage is to make the aircraft fly, allow for some basic flights and tests and three to five months later, give me the second requirement,” he says. “There are over 10 systems on the airplane, we can test some systems first, this will not affect our work.”

This is not the first time Comac has had to take drastic steps to keep its programme on track. Last year it abandoned plans for a composite wing and wingbox to prevent further complications and delays to the programme.

The initial target was for 30% of the aircraft to be made of composites, but the figure has since been cut to about 10%, with only the aircraft’s tail and movable parts made using the more advanced material. This means the C919’s airframe will be the technological equivalent to current narrowbodies produced by Airbus and Boeing. 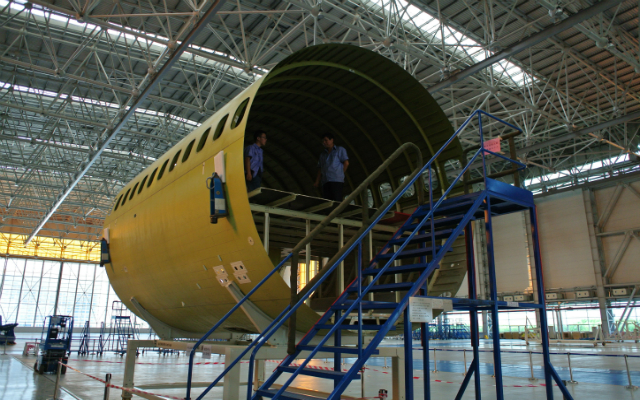 Chen says that last July, Comac embarked on a weight reduction exercise for the C919 which is 1-2% overweight. He explains that the airframer had initially taken a more conservative approach “to play safe”, hence specifying greater strength for its structures and systems, adding to the weight of the aircraft.

“After having test data, we have more accurate and precise specifications, with parts that can be thinner and narrower, hence bringing down the weight,” he says. “It will take more time and effort to redesign the parts and systems to reduce weight but this is something that has to be done.”

Chen also disclosed that Comac and Bombardier have dropped plans to pursue cockpit commonality in the C919 and Cseries. The airframers came to this conclusion after spending a large part of 2013 looking at the issue, only to find that wide disparities between the two types meant it was, from the start, hard to create a common cockpit.

Bombardier had previously told Flightglobal it was sharing its CSeries cockpit design with Comac, with the latter left to decide how much it would adapt to the C919, a less mature programme.

“Basically in the development of the C919, Bombardier is not involved,” says Chen. “They have experience in building regional jets, but not so much in narrowbodies.”

The two airframers first signed an agreement in 2012 to purse commonality between the C919 and CSeries in supply chain services, electrical systems, human interface and cockpit. Neither has disclosed what, if anything, has been achieved in the collaboration thus far.

Comac is keenly aware that even though it can count on a global supply chain and international assistance, the C919 can only be successful if it stands on its own merits.

Final assembly of its first of six test aircraft started after it took delivery of the first mid fuselage section of the C919 in mid-September, joining its forward fuselage. The aircraft’s aft fuselage and nose have all rolled off the respective manufacturers’ production lines.

Assistant general manager of Comac’s final assembly centre Li Hu says final assembly of an aircraft typically takes four to five months – he expects Comac to take more time, however, to fuse its very first C919. To ensure as smooth an assembly process as possible, the airframer is also seconding experienced engineers and technicians from the ARJ21 programme.

Chen says that though Comac has not fallen behind on the C919’s schedule, software integration could be the most challenging aspect of the programme going forward. His view is that unlike hardware, where one can “see and feel” issues almost immediately upon delivery, software problems can only be detected after the systems run and tests are done.

Comac has also been reluctant to set a public target on when it expects the C919 to be certificated, no doubt haunted by delays in its ARJ21 programme. Sources, however, tell Flightglobal the internal official target for certification is end of 2017 or 2018, but that a delay is highly expected.

Comac has also yet to decide on whether to pursue certification from the US Federal Aviation Administration or the European Aviation Safety Agency for the C919, although it has decided it will only seek one western certification initially. The airframer, however, should be more familiar with the FAA route considering its experience on the ARJ21. 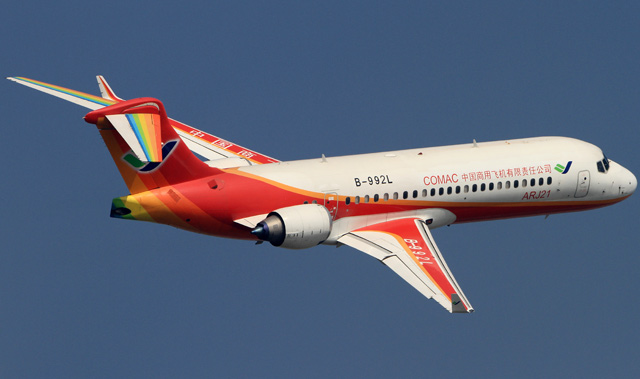 Asked why Comac could be turning to EASA, deputy director of the C919 programme Qian Zhongyan says: “The reality is that the ARJ21 certification has not been completed and FAA’s shadow certification on the CAAC is also not done. So for us, we need to evaluate the situation.”

He adds that Comac will soon need to make a decision on which certification route to pursue.

“The FAA’s position will be affected by the eventual outcome of its experience with the ARJ21,” he adds.

Comac is confident that the ARJ21, a programme started over 12 years ago, will receive certification from the Civil Aviation Administration of China by year end. It maintains that achieving FAA certification for the type remains a target.

Strictly speaking, Comac does not need western certification for either the ARJ21 or the C919 because most orders are from local airlines and leasing companies. The C919 is, however, a national ambition, and China craves recognition on the international stage. Comac has so far received commitments for 400 of the narrowbody.

Certification aside, the C919’s real test will be market acceptance, considering Comac’s position as a new manufacturer with no track record to speak of, says Rob Morris, Ascend’s head of consultancy.

“If Boeing can get the 787 wrong and Bombardier the CSeries, and arguably Airbus the A380 in its early days, then clearly Comac faces a significant challenge in demonstrating to the market that it has the capability to integrate and manufacture a larger commercial airliner like the C919, particularly given the ARJ21 experience to date,” he adds.

With the A320neo due to enter service in 2015 and the 737 MAX in 2017, it is critical that the C919 enters into service on schedule to avoid losing time to competition. Comac also has to ensure that the aircraft meets its advertised performance targets, analysts add.

What Comac lacks in experience and capability, however, it makes up for in determination.

This spirit is reflected in the banners that hang on the walls across the company’s facilities. In white lettering with a bright red background, the banners urge employees to work hard, be dedicated and most importantly, to push on.

More on the C919 programme;

At Comac, ambition and challenge are both on a large scale