As it touched down at the Royal Air Force’s Akrotiri base in Cyprus in the evening of 3 March, aircraft ZM400 became the first Airbus A400M to deliver a payload of “vital freight” for the service.

Piloted by a crew from the RAF’s Brize Norton-based 24 Sqn training unit, the “Atlas” carried an unspecified cargo load to Akrotiri, from where the UK is supporting US-led operations against Islamic State militants in Iraq with assets including Panavia Tornado GR4 strike aircraft.

The milestone event also delivered a boost for both the service and manufacturer, after what has been a turbulent four months for the multinational A400M programme since ZM400 – the RAF’s first of an eventual 22 examples – was transferred last November. According to plans that were still in place at that time, the UK should have been in a position to declare initial operational capability (IOC) with the new type this month, on the introduction of its seventh example. 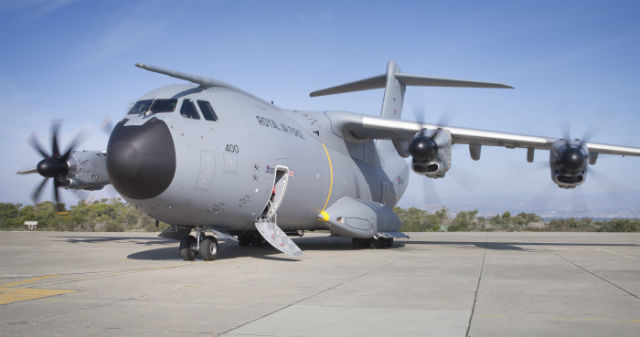 But even as the A400M programme’s ninth production aircraft, MSN15, was being showcased inside Base Hangar at Brize Norton on 27 November, it was clear that this schedule was at risk. Exactly two months later, chief executive Tom Enders used an Airbus Group reception in London to apologise to the UK Ministry of Defence for problems affecting its delivery schedule for the new-generation airlifter. “We have additional delays and I very much regret that we are unable to meet the commitments made to our customers several years ago,” he said.

Despite the challenges facing the programme, which Enders says centre on so-called “travelled work” required on the A400M’s fuselage and wing after their delivery to its San Pablo final assembly facility in Seville, Spain, Enders pledged that Airbus would strive to get the RAF’s fleet “to seven aircraft at least” by the end of 2015. This target was confirmed during the company’s annual results briefing in Munich on 27 February, and the UK now expects the Atlas to hit its IOC target during September, after a six-month delay.

Four of the RAF’s aircraft have emerged so far, with ZM401/MSN16 having been flown to Airbus Defence & Space’s Getafe facility near Madrid late last year to have its defensive aids system equipment installed. Once this work has been completed, the aircraft will be used to support trials of the self-protection suite.

The UK’s third production aircraft – ZM402/MSN17 – touched down at Brize Norton on 27 February, while its fourth, ZM403/MSN20, was photographed in its service colours in Seville on 8 March, suggesting that its first flight is imminent. 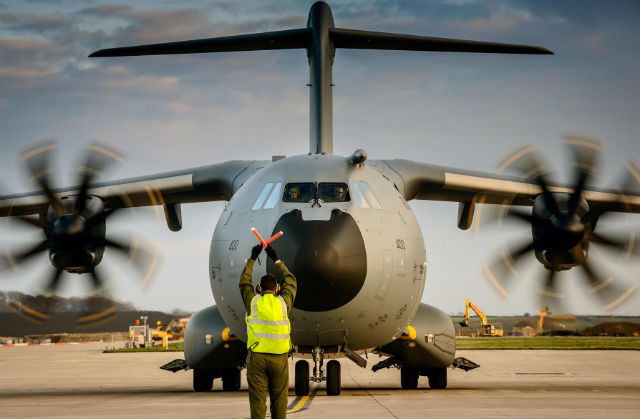 Airbus expects to deliver around 16 A400Ms this year, and RAF aircraft should account for close to half of this total, including MSNs 21 and 24 to 27.

In addition to supporting crew training tasks, the first application for the Atlas – as demonstrated by ZM400’s recent flight to Cyprus – is to provide a strategic air transport capability. According to a schedule detailed by the service late last year, such flights should also be conducted in “non-benign” airspace from around June 2016.

For the RAF, the significance of the A400M having performed its first flight in support of operations over Iraq before the first frontline pilots who will fly the type for its 70 Sqn have begun conversion training is evident.

“This task illustrates how we are developing the use of the aircraft in this early period,” says Wg Cdr Simon Boyle, the unit’s officer commanding. “We have been able to support defence operations while continuing to grow the experience of the force’s aircrew instructors, before they begin to train the crews destined for 70 Sqn later this year.”

According to the service’s introduction plan, further capabilities will be added to the growing fleet, such as the airdrop of personnel and equipment, before its declaration for use as a tactical transport asset from September 2018. This will coincide with the phased draw-down of the RAF’s smaller Lockheed Martin C-130Js, the first several of which will be retired later this year. This transition will lead to the A400M force, which also will include a second operational squadron, being declared fully deployable by March 2019, following the acceptance of its final aircraft.

Data provided by the RAF suggests that the A400M will be able to carry a 30t payload – 2t less than its usual maximum – a distance of 2,450nm (4,540km), 450nm further than a C-130J carrying just 12t. Also boasting the ability to cruise at 37,000ft and Mach 0.72, the new type’s range will be increased to 3,450nm with a 20t load, and to a maximum ferry distance of 4,700nm. The latter will enable an aircraft taking off from Brize Norton to fly nonstop to southern Africa, east Asia or the majority of North America.

“Every A400M crew will be capable of worldwide operations carrying passengers, freight and the majority of loads that we carry today,” according to 24 Sqn officer commanding Wg Cdr Dorian James.

By 2022, the current planned out-of-service date for the UK’s remaining Hercules, the A400M will have assumed all of the type’s roles, including supporting operations involving special forces personnel. For this requirement, selected crews will be trained to perform tactical flying by day or night down to 150ft, and for the aircraft to make high-altitude paratroop insertions from 40,000ft.

With the UK’s A400M acquisition worth some £2.8 billion ($4.2 billion), much is riding on the Atlas now delivering on its promised high performance, to complete a modern airlift force also including the Boeing C-17 strategic transport and Airbus A330 Voyager tanker/transport.

As Airbus strives to get back on track in delivering A400Ms with the contractually required level of operating capability, the near-term arrival of additional aircraft at Brize Norton should ensure that the RAF keeps to its schedule to transition from the hard-worked and less capable C-130J. As one senior officer notes: “We could not be any better positioned now, with regard to where we may wish to project in the future.”