Low-pressure turbine (LPT) blades for aircraft engines could be the next application conquered by additive manufacturing techniques.

GE Aviation has already pushed selective laser sintering – a form of 3D printing – further than anyone else, announcing on 15 July that a factory in Alabama will be the first to mass-produce jet engine parts using an additive manufacturing process.

That factory will build fuel nozzles for the CFM Leap-1, which combines a core made by GE and a low-pressure section from Snecma. GE is now evaluating a different 3D printing process to build LPT blades for the GE9X – the engine selected to power the Boeing 777X, and the engine maker’s most complex propulsion system yet.

“I think that the first application for LPT blades would probably make its way on the GE9X,” says Greg Morris, additive manufacturing leader at GE.

Morris is credited for GE’s keen interest in additive manufacturing, even as rivals have expressed scepticism about the near-term potential of 3D printed parts in jet engines.

He founded an eponymous start-up in the early 1990s, which happened to be located near GE Aviation’s headquarters in Cincinnati. A relationship formed between the start-up and the industrial conglomerate, which spread from small prototypes to the CFM fuel nozzle. 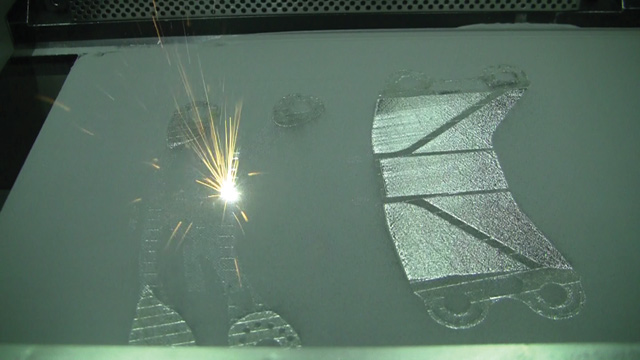 GE believes 3D printing can be used beyond non-critical components

Another recent GE acquisition is also involved in the decision on 3D printing for LPT blades, however.

GE closed a deal to acquire Italy’s Avio a year ago, and the LPT manufacturing specialist has since opened a 1,900m2 (20,000ft2) facility dedicated to additive manufacturing of engine parts.

Avio is evaluating the suitability of 3D printing to build LPT blades for the GE9X. “We are now going through a process of validation of our blades,” says Riccardo Procacci, chief executive of Avio Aero.

Avio is working with a 3D printing process known as electron beam welding to “grow” the LPT blade additively – meaning that none of the metal needs to be machined away in the initial build.  ATI Metals, meanwhile, also displayed a picture of a new blade at Farnborough air show. The company currently supplies titanium aluminide billet to Avio and GE for LPT blades on production engines, such as the GEnx.

Titanium aluminide is a useful material for engines because it is strong, lightweight and can withstand intense heat. One drawback, however, is that it is hard to machine into a finished part using conventional processes, which involve pouring the liquid metal into a mould, casting it and then machining off the excess material.

“Titanium aluminide is notoriously a very difficult material to work with, both in the casting as well as the post-machining process,” Morris says. “[Electron beam welding] is a very efficient way to create these LPT blades.”

Avio is also experimenting on a process to build multiple blades simultaneously, with the final result on each piece requiring up to 20% less machining to complete. Pratt & Whitney and Rolls-Royce currently use 3D printing to build prototypes and non-critical parts, such as brackets. 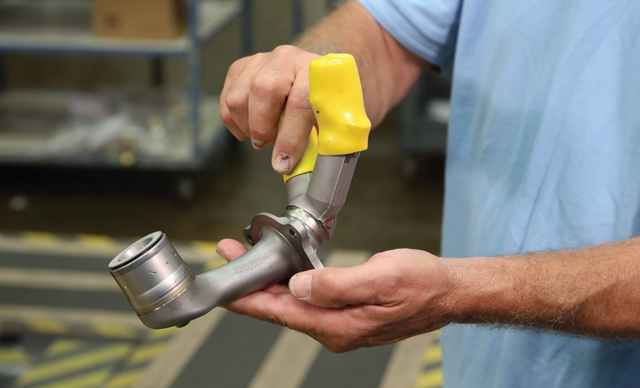 The company plans to print thousands of fuel nozzles per year

However, both engine makers have predicted it will be decades before additive manufacturing techniques become a practical way of building parts for production aircraft engines.  GE, however, believes the technology is mature enough to reliably build thousands of fuel nozzles, and perhaps LPT blades, each year.

“We’re taking it from where it was as a prototyping industry to truly an additive manufacturing industry,” says GE Aviation chief executive David Joyce.  The particular design of the Leap-1 fuel nozzle can only be built using a 3D printer, due to intricate channels within the part, Joyce adds. If GE decides to build the LPT blade of the GE9X using a 3D printer, it will be because the titanium aluminide material is so hard to machine into its final shape.

More applications for additive manufacturing are not far behind as the technology matures – but so far only at GE Aviation.

“We could go crazy. I could talk about 50 parts and applications we’re looking at and get everybody really excited about it, but we’re trying to be very controlled about where we feel we have our arms wrapped around it,” Morris says. “We have years [or] decades before people accept it like they accept it like a casting today.”