The view is commanding, despite the heavy rain which lashes the helipad on a cold September morning. Some 280ft above the entrance to the Royal London Hospital in Whitechapel, this is the perfect launch point for an aircraft which is tasked with saving lives among the capital’s more than 10 million residents, commuters and workers. 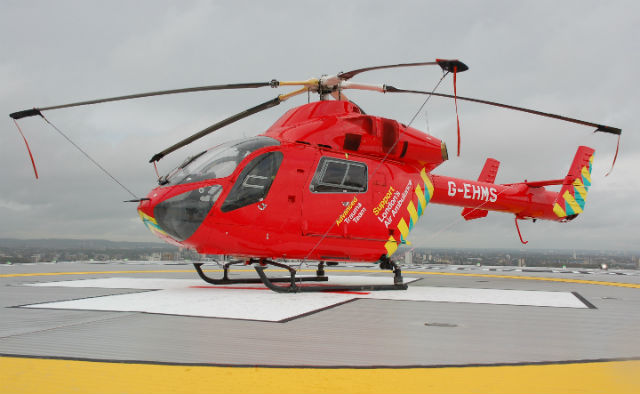 Sporting a striking red livery not unlike that used on the thousands of buses which connect up the city, the MD Helicopters MD902 operated by London’s Air Ambulance is a familiar sight in the sky above the metropolis, having been in service with the charity for the last 15 years. Adapted for the emergency medical services role, G-EHMS is flown with a crew of two pilots as well as a three-strong advanced trauma team made up of a doctor, paramedic and training paramedic.

Their mission is not necessarily to airlift an injured person to hospital, but to stabilise the casualty on arrival at the accident scene – if necessary making interventions up to performing a blood transfusion, or even open-heart surgery, on the roadside.

If an air transfer is still required after such immediate work, the 2.9t aircraft will move the patient to one of London’s four main trauma hospitals, or to another specialist unit.

Once dispatching the air ambulance has been deemed appropriate by a paramedic located in the London Ambulance Service emergency operations centre and by the team at the Royal London, a klaxon sounds in the compact crew room located on the 17th floor of the hospital. The pilots will be on board and ready to lift within 3-4min, with the medical team boarding as the MD902 is started up. Within 15min, the aircraft – which can achieve 140kt (260km/h) – can touch down at any area inside London’s M25 orbital motorway.

Typical incidents include responding to road traffic accidents, people involved in falls from height and those struck by trains, as well as stabbings and shootings. Landing locations must have free space of at least double the MD902’s rotor diameter of just over 10m (33ft), with one pilot flying and the other with ‘eyes outside’ the cockpit to look for potential hazards. This small footprint rules out the use of a larger aircraft, while the type’s no tail-rotor design also increases safety on the ground. 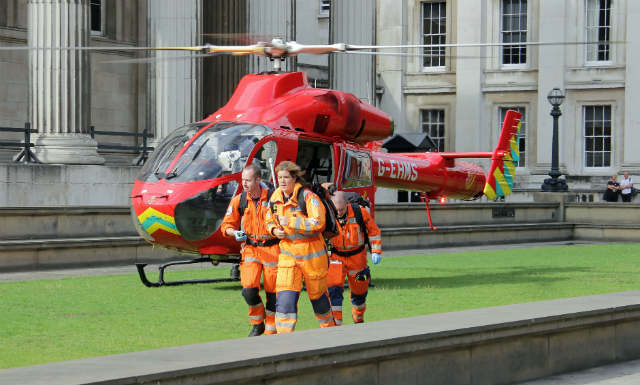 “At worst, someone only gets blown over,” notes Andy Thomson, one of five captains who fly the aircraft under a 12h shift pattern covering daylight-only operations. “For our role in London it’s great, with good visibility for the pilots.” Nighttime operations are not possible in an urban environment, and during those hours rapid response vehicles are used instead.

For the first time in its 26-year history, the charity operated under extended flying hours between April and early September, with the change made possible by contracting three highly experienced co-pilots to help crew two shifts per day.

“No day is the same, and the weather and the time of day doesn’t really come into it,” Thomson says. “Most of our flights are 5min – but there is a lot going on,” he notes. The team might remain on the ground for 1h in order to stabilise a casualty, and an average of five critically injured patients are treated every day by the aircraft and response cars. 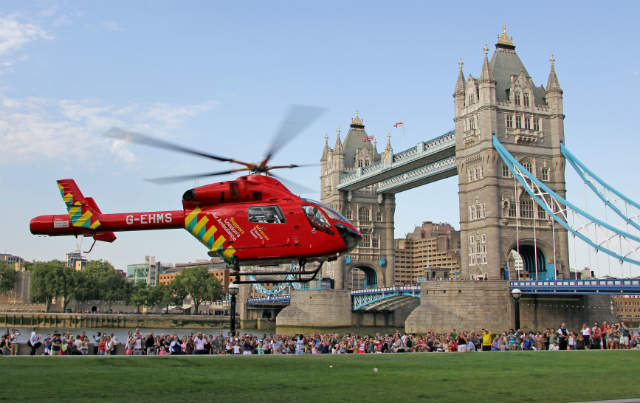 London’s Air Ambulance requires support totalling £4 million ($6.2 million) per year to sustain its operations, with a further £1 million allocated by the NHS. While it has in the past had the backing of major sponsors – first the Daily Express newspaper, and then Virgin – it now relies on more limited corporate funding from a handful of companies, plus donations from the public.

After a lengthy fund-raising campaign, the charity is on track to acquire a second aircraft. It has so far raised more than £4 million of a £6 million target to acquire and support the additional helicopter and “extend the charity’s daylight flying hours for five years”.

By having two aircraft available, the charity should be able to sustain a more uninterrupted service, as G-EHMS has been unavailable for the equivalent of 53 days so far this year, due to essential maintenance. Such work is performed at its overnight and support location: the Royal Air Force’s Northolt base in West London. The charity estimates that it will be able to treat 400 extra patients per year with a two-strong fleet. While the operator declines to provide details ahead of an announcement, Flight International understands that it intends to obtain a second MD902, to ensure crew commonality and maintain its pilots’ ability to land in small spaces.

London’s Air Ambulance has treated almost 33,500 patients since its launch in 1989; initially equipped with a Eurocopter AS365 ­Dauphin. In 2014, its staff treated just over 1,800 patients at locations around the capital.

The team has made numerous sector-leading advances, such as being the first UK air ambulance to operate with two pilots and to carry refrigerated blood supplies on board.

Last year, it also began to use a technology which can prevent casualties such as cyclists who have been crushed by heavy goods vehicles from bleeding to death, by inserting and inflating an endovascular balloon to temporarily stop the supply to damaged blood vessels.

Other techniques – such as how to deal with severed limbs – have been improved thanks to the direct experience of personnel who served in medical emergency response teams during the UK’s combat involvement in Afghanistan.

Senior doctors assigned by Barts Health NHS Trust will spend six months with the air ambulance and paramedics seconded from the London Ambulance Service nine months. During this time, they will gain daily exposure to major trauma, while pilots get to fly in one of the most dynamic environments possible.

“This is the most sought-after posting, because you get the most experience,” notes John Power, the charity’s chief fire officer, who has spent more than 20 years with the operation.

To support London’s Air Ambulance, visit yourhelicopter.london, and for information about the UK’s other such charities, go to associationofairambulances.co.uk