Vietnam experienced strong growth in visitor arrivals from Western Europe in 2014, but this correlated with heavy capacity growth to Ho Chi Minh and Hanoi in recent years by the big three Middle Eastern carriers.

Although Vietnam is not in Thailand’s league as a Southeast Asian tourist destination, it has a great deal to offer foreign visitors. It has vibrant cities, unique historic landmarks and fine beaches. It also has one of Asia’s most distinct cuisines, made famous by the country’s national noodle soup, pho.

According to Vietnam’s National Administration of Tourism, visitor arrivals from all key western markets rose in 2014. In theory this boost in arrivals should benefit flag carrier Vietnam Airlines, but capacity numbers from Flightglobal’s Innovata networks data service suggest that a good number of these new arrivals may be flying through the Persian Gulf.

Key Western European arrival markets include France, Germany, and the United Kingdom. Tellingly, no Middle Eastern country is listed as being among a key source of visitor arrivals.

To Frankfurt and London, Vietnam Airlines is the only carrier. To both European cities, it operates 17-times-monthly from both Hanoi and Ho Chi Minh City with Boeing 777-200 aircraft.

On Paris routes, it competes with Air France, which flies 13-times-monthly to Ho Chi Minh City.

While Innovata shows that Vietnam Airlines steadily increased Western European capacity up to 2012, it has cut back in the last two years. This has coincided with a massive surge in overall Middle Eastern capacity in 2013 driven by Emirates, Qatar Airways, and Etihad Airways.

Etihad’s growth is noteworthy in the context of Vietnam’s 45% increase in arrivals from Germany during 2014, as the Abu Dhabi-based carrier enjoys strongconnectivity to Germany, as together with equity alliance partner Air Berlin it serves Berlin, Dusseldorf, Frankfurt, Stuttgart, and Munich. 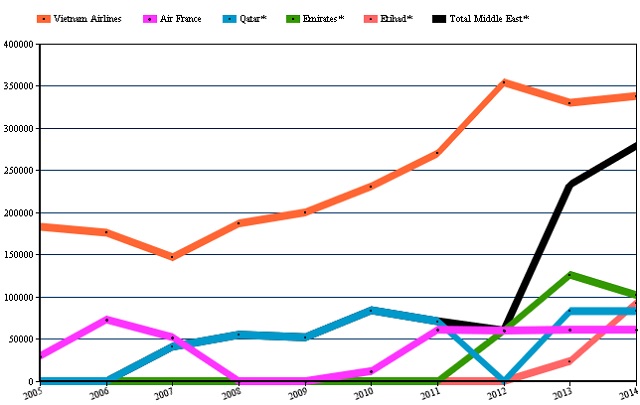 The Middle Eastern carriers are not the only source of transfer traffic into Vietnam, of course, as this connectivity is also offered by other regional network players such as Singapore Airlines and Cathay Pacific.

Nonetheless, the one-stop connectivity to Vietnam that Middle Eastern carriers offer from Europe’s secondary cities is very difficult for the region’s big network carriers to challenge – let alone a secondary carrier such as Vietnam Airlines.

The management of Vietnam Airlines can probably relate all to well with counterparts at Thai Airways International and Malaysia Airlines, which share the common experience of a low cost upstart at home and mounting long haul pressure from the Middle East.