Traffic at San Juan Luis Munoz Marin International airport continues to surge amid a multi-year renovation effort that was intended to help the airport recover from sagging passenger numbers.

Traffic expansion was a prime goal of Aerostar, which in 2013 received authority from the FAA to operate the airport for 40 years, making the company among the first private operators of a large US airport.

As part of that $2.6 billion deal, Aerostar agreed to invest million in renovations. It also adopted a funding model under which revenue from airlines is capped for five years, and split among carriers.

Aerostar says it has already invested $750 million in the airport, including $205 million to improve the concourses.

Aerostar completed work in 2014 to the nine-gate concourse B, from which operate most major US carriers, including Delta Air Lines, Spirit Airlines, Southwest Airlines and United Airlines.

Arellano says Aerostar has completed 95% of that work, with remaining renovations expected to be finished in March.

Also in March, Aerostar plans to hold a ground-breaking ceremony to mark the start of a $5 million project to build a customs and immigration inspection facility in concourse A, from where JetBlue Airways and several regional carriers operate.

The project, which is scheduled to be completed in September 2016, was favoured by JetBlue over an earlier proposal to build a bridge connecting concourse A with inspection halls in other areas of the airport, Arellano says.

He also says the airport and airlines benefit from a funding structure that caps airline fees at $62 million annually for five years.

Because airlines share that expense based on operations at San Juan, they can lower per-passenger airport fees by adding capacity, he notes.

So far, Aerostar’s efforts seem to be paying off.

In the first quarter of 2016, airlines will carry 1.4 million one-way seats from San Juan, up nearly 13% year-over-year, according to Innovata data.

Despite notable gains in traffic, the airport has far to go before returning to levels enjoyed until about 2007, when American Airlines began dismantling its once-powerful San Juan hub. 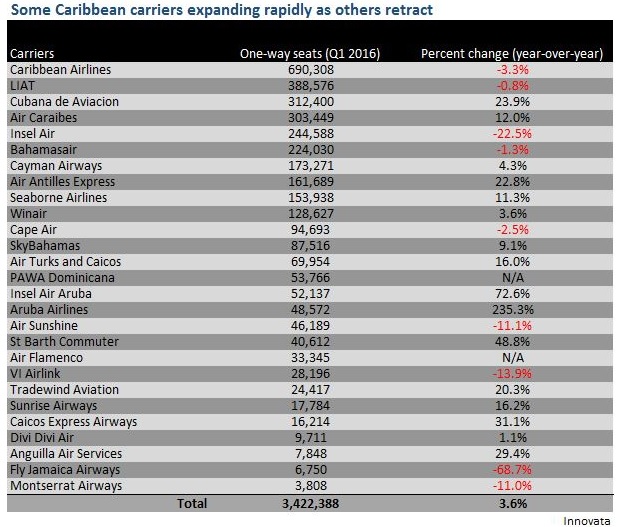 United Airlines, for instance, will grow San Juan capacity by 54% year-over-year in the first quarter, while American’s capacity will be up 10% and Air Canada’s capacity will climb a quarter, Innovata shows.

He adds that Aerostar hopes to soon land another route to South America and one to Europe, possibly to Paris or Amsterdam.

In addition to long-haul growth, smaller regional carriers continue to pick up routes abandoned years ago by American.

For instance, Seaborne Airlines, based in San Juan, will carry 15% more seats from the city this quarter, data shows.