Brinkmanship was the name of the game for much of the 2017 calendar year, with global tensions in no small part linked to the head-on approach to diplomacy taken by US President Donald Trump.

Largely continuing with the firebrand soundbites which brought him to the Oval Office, Trump swiftly placed his administration on a collision course with Russian President Vladimir Putin over Moscow’s support for Bashar al-Assad’s regime in Syria.

Tensions peaked in early April, when a pair of US Navy destroyers launched 59 Raytheon Tomahawk cruise missiles towards Syria’s Al-Shayrat air base, targeting its runways and hardened aircraft shelters housing Sukhoi Su-22s. Despite initial claims from the Pentagon that about one-third of its more than 40 such ground-attack aircraft had been destroyed, Flight Fleets Analyzer shows the action as having had limited materiel effect. It did, however, draw Russia’s ire, as a detachment of its own combat aircraft was using the same Syrian base.

Another spike in rhetoric came in mid-June, when a Syrian Su-22 was shot down by a US Navy Boeing F/A-18E Super Hornet after attacking opposition forces backed by Washington. Syria threatened to target US combat aircraft with advanced surface-to-air missile systems in the wake of the incident.

Trump’s standoff with North Korean leader Kim Jong-un was of greater concern, with the pair trading personal insults against a backdrop of potential nuclear conflict. After Pyongyang’s forces tested a nuclear device, flew intercontinental ballistic missiles over Japan and threatened to pair the combination to target US military personnel on Guam, the US president’s threat of assured annihilation for North Korea harked back to the height of the Cold War between Washington and Moscow. Thankfully, their war of words has yet to escalate further. 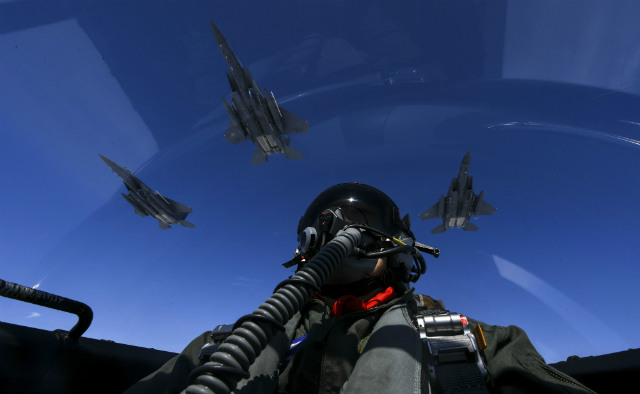 Despite the removal of Islamic State forces from their remaining strongholds inside Iraq, that part of the Middle East shows no sign of finding stability, as conflicts also are continuing in Syria, and within Yemen, where a Saudi Arabian-led coalition is targeting insurgents.

Further afield, Afghanistan also remains highly volatile, with NATO looking to increase the strength of its Resolute Support mission to train and advise government forces. Currently, the international community contributes about 13,000 personnel – more than half of which are allocated by the USA – and this total is expected to climb to 16,000.

Efforts to build the Afghan military’s capabilities continue apace, with recent developments including a plan to equip its air force with a further six Embraer/Sierra Nevada A-29 Super Tucano combat aircraft, for an eventual total of 26. But Kabul’s rotorcraft renewal is on a far more spectacular path, with US-sourced types to significantly boost its fleet over the coming years.

The Afghan air force currently has 28 armed MD Helicopters MD530Fs, and Washington plans to provide it with another 154. The service’s first pilots for the Sikorsky UH-60A recently completed their conversion training, and the first four ex-US Army Black Hawks from a planned 159-strong fleet were transported to Kabul in September 2017. The bulk of this fleet will serve in the utility role, but the US Department of Defense indicates that at least 58 aircraft will be in an armed configuration. 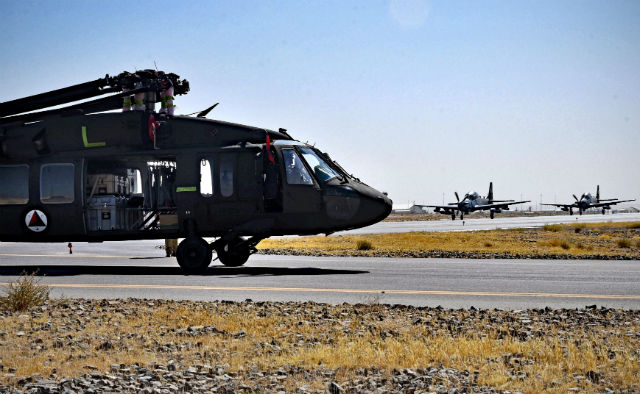 Totalling more than 65,000 aircraft, our annual overview of the global military aircraft inventory is powered by Flight Fleets Analyzer, which holds premium-quality data on more than 360,000 aircraft, also including airliners, rotorcraft and business jets.

This year’s directory details more than 53,500 aircraft in active service with militaries around the globe. The total represents an increase of just over 500 units – roughly 0.8% – from our figure 12 months ago.

Notable shifts include the departure of the US Army’s Bell OH-58 armed scout helicopters, which has also reduced the model’s global inventory from 502 to 139 aircraft, pushing it out of our Top 10 listing for combat helicopter types. The US Marine Corps’ tanker/transport inventory also has been depleted, following the removal of its remaining Lockheed Martin KC-130Ts after a fatal accident which left 16 service personnel dead.

Our improved data for the first time includes the MFI-15/17/395 range of primary trainers, with nine nations having a combined 467 examples, including in Pakistan Aeronautical Complex’s Super Mushshak standard.

Also included are almost 4,800 aircraft that are the subject of firm orders, plus more than 6,700 that are pending deals or covered by letters of intent – including in excess of 2,800 Lockheed F-35s for the US military and multiple allied nations.

Following the OH-58’s retirement, the US military’s share of the active global fleet has fallen by a single percentage point, to 25%. Its total strength of just over 13,400 aircraft puts it in a league of its own, being almost three and a half times greater than second-ranking Russia. It also exceeds the combined fleets assigned to Moscow’s armed forces, plus those of third- to sixth-placed China, India, Japan and South Korea.

Our top-10 operator listing by nation shows Pakistan as climbing to seventh spot, in the process leapfrogging France, Egypt and Turkey, due to our including the 337 aircraft within its MFI-17/395 trainer fleets. Its updated total of 1,285 in-service aircraft gives it 2% of the global fleet.

While the overall fleet has grown by less than 1%, our map of the worldwide active inventory shows only the North American region as having declined in strength through 2017, with a movement of -3%, against 358 fewer aircraft. The Asia-Pacific and Latin America regions both saw 4% increases; Russia and its Commonwealth of Independent States partners 2%; and the Middle East 1%. Totals for Africa and Europe show no change over the 12-month review period.

Across our six sector categories, only two experienced a year-on-year reverse. Fleets Analyzer shows 692 tankers as in use – 68 fewer than a year ago; and 4,199 transports: down by 76. Our updates have boosted the training aircraft/helicopters category by 463 aircraft, to stand at more than 11,600.

An increase of 67 entries in the combat aircraft sector represents a movement of less than half a percentage point. This category – with 14,700 aircraft – accounts for 27% of all military aircraft: a share beaten only by combat helicopters, at more than 20,200 units: almost 38%.

Including test and evaluation-dedicated examples excluded from our operational listing, Lockheed has now handed over more than 250 F-35s. This total contains “combat-coded” aircraft for the US Air Force and USMC, plus initial Lightning IIs for the USN and international buyers Australia, Israel, Italy, Japan, the Netherlands, Norway and the UK. 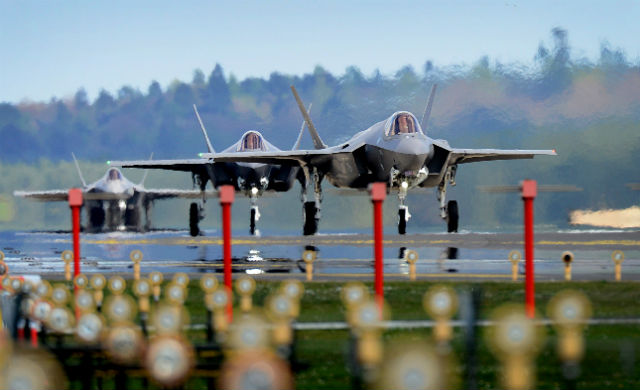 The first F-35s to emerge from final assembly and check-out facilities in Cameri, Italy, and Nagoya, Japan, emerged in May and June, respectively, adding to deliveries from Fort Worth, Texas. Other highlights included F-35s making debut appearances at the Avalon air show in Australia, June’s Paris air show and the Seoul ADEX event in South Korea.

Threats made to the F-35 by Trump early in his presidency – including negotiation by Twitter and touting competition for orders with the Super Hornet – placed greater pressure on Lockheed to reduce unit costs as its production ramp-up continues. But despite high-profile attention given to the USAF’s OA-X low-cost close-air support experiment, the F-35 remains the US military’s backbone for future acquisitions.

Also in the fighter sector, Qatar ordered 36 Boeing F-15QAs and signed a memorandum of understanding with the UK which could lead to a 24-aircraft deal for the Eurofighter Typhoon. BAE Systems delivered its first Typhoons and new Hawk advanced jet trainers to Oman in 2017, while its industry partner Leonardo also handed over the Eurofighter programme’s 500th aircraft, to Italy.

China is reported to have placed its first pair of stealthy Chengdu J-20s into service, but the twin-engined type’s capabilities and intended role remain uncertain – along with the likely fleet size being considered by Beijing.

Serbia’s air force received a boost in October 2017, with Russia donating the service six RAC MiG-29s to bolster its air defences. And in a significant milestone for the Swedish air force and launch export customer Brazil, Saab’s new Gripen E was flown for the first time in June.

Meanwhile, a potential Super Hornet sale to Canada fell victim of a bitter duel between Boeing and Bombardier over Ottawa’s financial support for the CSeries regional airliner programme. Fleets Analyzer shows this has trimmed the F/A-18E/F and EA-18G derivative order backlog to just 38 aircraft; all for the USN.

Among the year’s highlights in the special mission category were two follow-on orders for Saab: the first from Pakistan, for another three Saab 2000-based airborne early warning and control system aircraft; and the formal addition of a third Bombardier Global 6000 GlobalEye multi-mission platform for the United Arab Emirates.

The Airbus Defence & Space A330 multi-role tanker transport (MRTT) also enjoyed further success, with a European Defence Agency-led initiative which will deliver an initial two aircraft for use by Luxembourg and the Netherlands increased by five units following the addition of Germany and Norway. Further signatories to the pooled fleet arrangement could boost the future NATO-operated fleet to 11 aircraft. A first MRTT for the French air force also made its debut flight in September (below), ahead of delivery in 2018. 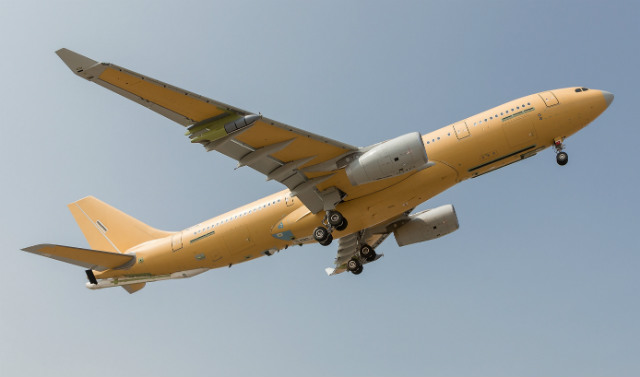 Boeing, meanwhile, has made progress with its 767-based KC-46A Pegasus for the USAF, and is due to deliver its first batch of 18 tankers to the service from 2018. The boom-equipped type’s entry into operational use will be closely watched by prospective future operators, such as the Israeli air force, as it begins to replace its launch buyer’s Boeing 707-based KC-135s.

Transport aircraft programme activity in 2017 included the delivery of the 50th Airbus A400M, and the first flight of a C-130J for Atlas operator the French air force. Testing of the Embraer KC-390 transport/tanker remains on course to support the twinjet’s delivery to the Brazilian air force in 2018.

Rotorcraft-sector developments included Airbus Helicopters gaining a first military selection for its H160, from France. Paris expects to acquire approximately 160-190 of the aircraft, to be delivered from about 2024.

Meanwhile, a decision on the USAF’s T-X trainer requirement is now expected in early 2018, with the competition having narrowed markedly following the departure of BAE, Northrop Grumman and Raytheon. This leaves the air force with a choice between the Boeing/Saab T-X, Leonardo DRS T-100 and the Lockheed/Korea Aerospace Industries T-50A as a replacement for the bulk of its current 501 Northrop T-38s.

Excluded from our listing are 678 fixed-wing aircraft and helicopters recorded by Fleets Analyzer as being dedicated to VIP transport duties, plus about 300 tasked with research and development or experimental activities, including those assigned to bodies such as France’s DGA defence procurement agency’s CEV flight test centre and the UK’s Qinetiq.

Other exclusions include almost 5,100 aircraft which are recorded as currently in storage – also counting those involved in or awaiting upgrade, and Fleets Analyzer does not hold information on the majority of piston-engined types in military use. Our directory also omits those assets tasked with performing support tasks such as calibration or mapping, firefighting, satellite tracking, skydiving, surveying, target towing, weather reconnaissance and use by military-operated airlines.