News on 13 January that Alitalia had ended talks over a potential 49% investment in Air Malta came as little surprise, but confirmed another European operator in the market for investors.

Over recent years, several European airlines – including Alitalia itself – have successfully secured airline investors or partners. But many, including one or two that had secured initial capital, remain in the market for investment. The examples of Cyprus Airways and Estonian Air serve as reminders of the potential consequences for those carriers unable to secure fresh capital.

As a small island operator, Air Malta will be acutely aware of the Cyprus Airways example. In Air Malta's favour, it is has secured European Commission approval for its most recent restructuring efforts – whereas it was an EC ruling ordering repayment of illegal state aid that finally led to the end of the road for the Cypriot carrier. Of more concern may be that the best part of a year has passed without progress since Air Malta's dalliance with Alitalia began.

The Italian carrier last April embarked on due diligence with a view to acquiring a 49% stake in the Maltese operator. It had initially hoped to conclude a deal by the summer. But no agreement emerged, and while the Maltese government insisted that talks remained ongoing, a deal had seemed increasingly unlikely given not only the delays but the increasing challenges at Alitalia. The Italian carrier is itself seeking major cost savings so that its shareholders can be persuaded to further back the airline.

"The two airlines agreed that the current changing landscape in the airline industry was not ideal for a such a transaction and that both airlines would concentrate on the current challenges without entering into a partnership," Alitalia and Air Malta said in a joint statement confirming the end of investment talks.

Air Malta now must start again. The Maltese government did, in November, reveal that talks had been held with businessman Edward Banayoti to discuss the possibility of his acquiring a stake in the flag carrier, while one Maltese paper is reporting that early co-operation talks have taken place with Air China.

In a wide-ranging interview with Malta Today on 15 January, Maltese tourism minister Edward Zammit Lewis said only: "We are pursuing other avenues for a partnership, but we will not sell ourselves cheap. We want a partnership that is beneficial to Air Malta."

The government has made clear its preference that the carrier's search for an investor involve finding a strategic airline partner with an international network. The failure to secure a deal with Alitalia, together with a toughening European market environment, makes this more challenging.

"We do not exclude the possibility of reaching agreements with other airlines; nor even to turn to local investment, as some have suggested," says Zammit Lewis. "But we were always cautious, because we believe that local investment, on its own, will not address all problems. But we have also worked on a standalone option. We don't exclude that, either."

Air Malta joins a series of European carriers looking to secure investment or a strategic partner.

Like Air Malta, Italy's second-largest carrier Meridiana spent much of last year working on a deal to seal new investment. Initial plans for a tie-up under which Qatar Airways would invest in Meridiana were first proposed a year ago – contingent on a union deal accepting wage and job cuts. Sufficient progress was made for Qatar to sign a preliminary deal to take a 49% stake in Meridiana, subject to certain conditions.

The Gulf carrier initially aimed to complete a deal in October, though Qatar Airways chef executive Akbar Al Baker in November said the company hoped to conclude discussions by the end of January. "During this period [Meridiana] also has to deliver certain conditions and achieve certain targets in its performance," he said.

Another carrier seeking a strategic partner is Air Baltic. The airline did complete a capital increase in the first half of 2016, after German investor Ralf-Dieter Montag-Girmes acquired a 20% stake in Air Baltic. But the Latvian state retains the other 80% and the airline in December enlisted the help of financial advisory firm Lazard in its search for a new investor.

The airline's chief executive Martin Gauss said during a December press briefing that at least part of the Latvian government's majority shareholding was to be sold to a "strategic partner" in 2017. Gauss indicated that the additional partner would "ideally" be an airline that could take Air Baltic "under a bigger wing".

Polish carrier LOT has been on the hunt for potential investors since embarking on a restructuring a major restructuring. While a provisional strategic partnership pact struck with Turkish Airlines in 2015 was signposted to lead to a "major expansion of commercial ties", no subsequent agreements have since been announced. LOT was also in mid-2016 linked to talks to Chinese investors.

LOT chief executive Rafal Milczarski told FlightGlobal in April that the government was assessing the opportunities with various partners.

Croatia had hoped to push ahead with the privatisation of Croatia Airlines during 2016 and began the year carrying out preparations for a sale. But the process faltered. Airline management in December submitted a plan for the future development. That initially put the brakes on a planned move to sell its London Heathrow slots – though the airline has now sold five of its nine daily slots at the airport to US carrier Delta Air Lines.

UK leisure carrier Monarch Airlines may be another carrier in play during 2017. It early last year identified interest from potential buyers but is also looking at possible external acquisitions of its own. But while the restructured carrier returned to profit in 2015, toughening market conditions required it to secure fresh capital. Ultimately, it benefited from a £165 million ($200 million) investment by owner Greybull Capital, which enabled it to renew its Air Travel Operators' Licence for another year.

Another UK operator, Stobart Air, at the end of 2015 said negotiations were under way with investors as it sought to prepare for planned growth. That resulted in CityJet holding talks over a possible acquisition of the operator. These talks, though, ended in November. Stobart Group has since expanded its relationship with Flybe, under which it is operating to 18 new destinations from London Southend on behalf of the UK carrier.

A number of carriers have, however, secured new investors over recent years. Aer Lingus, Alitalia, Czech Airlines and TAP Portugal were all among European mid-sized carriers to have secured airline investors, while last year closed with changes in ownership at Brussels Airlines and Niki.

The Belgian carrier will operate as part of the Eurowings group after Lufthansa agreed to take the remaining 55% stake – giving it 100% of the airline's shareholding. Etihad Aviation Group meanwhile acquired Air Berlin's 49% stake in Austrian leisure carrier Niki, which in turn it is contributing to the new leisure carrier being set up together with TUI. 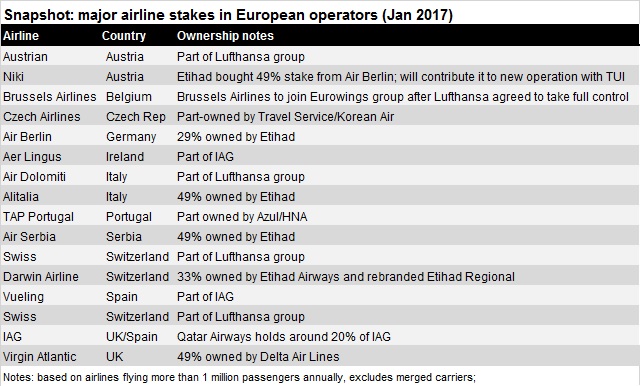 Indeed, relatively few major European airlines have collapsed over the years since Spanair and Malev led a spate of airline failure amid the financial crisis – Transaero, a victim of Russia's economic and currency problems during 2015, being the most notable exception.

Recent casualties have included Cyprus Airways and Estonian Air. In both cases, new carriers have emerged to fill the void – in Estonia, Nordica is attempting to build a niche, while in Cyprus the likes of Cobalt and Tus Airways have both launched.