How do you measure whether a chief executive has succeeded during their time in charge of a company? Is improved profitability the key metric? The launch of a new product? Some deep cultural transformation? Perhaps a mixture of all the above and more? But at a basic level the question is: have they left the company in a better state than that in which they found it?

As Guillaume Faury prepares to depart Airbus Helicopters for the hot-seat at Airbus commercial – to be replaced by Bruno Even from Safran Helicopter Engines – how does that question apply to him?

He has certainly ticked the transformation box – if nothing else, the manufacturer has a different name now than when he arrived – having overhauled how it designs, builds and supports its helicopters. It has a new product too, the H160, which has passed from concept to design to a fleet of three flight-test prototypes with only the most minor of hiccups.

Airbus Helicopters has yet to disclose any sales figures for the medium-twin, but has hinted at an extremely positive response from the market.

Profitability, though, while easier to quantify, needs a caveat: although profits have slipped – falling 18% year-on-year for the first nine months of 2017, on top of a 28% drop to €308 million ($383 million) in 2016 – the rotorcraft industry has been experiencing a pronounced slump since 2014, where sales and profits have trended in only one direction. That said, during the period Airbus Helicopters has maintained – if not slightly increased – its 50% share of the global civil and parapublic market. 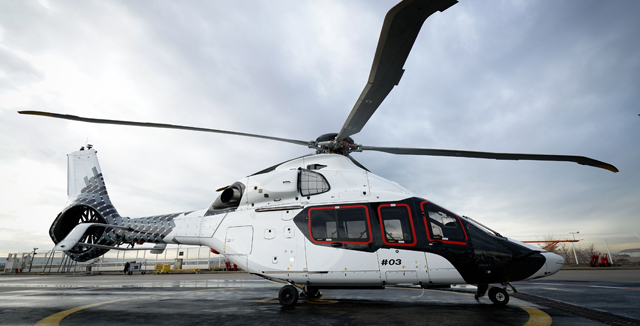 Detailing the results in January, Faury said "we reached our target" despite the "lower but rather stable market environment".

He predicts the airframer will achieve about 400 deliveries in 2018, which he describes as "a good challenging objective".

Faury himself acknowledges the market conditions that have been the backdrop to the majority of his five-year tenure at the company, albeit with a positive twist.

"Never waste a good crisis," he says. "Over the last four years the helicopter industry has sailed through a crisis – maybe the biggest crisis it has faced in the past decade.

"We used this crisis as an opportunity to accelerate change. Crises are times where you do things that you would not do otherwise."

During the period, Faury has driven a company-wide transformation effort, so that Airbus Helicopters has "become stronger and more performing for the benefit of our customers", he says.

"There has been a quiet revolution at Airbus Helicopters which has kept us busy for the last four to five years."

It has been what Faury describes as the "first phase" of the transformation. With some of the work taking place behind the scenes – notably on the "digitalisation" of the company – the most obvious change has been to the manufacturer's industrial model, which has seen it "effectively becoming an Airbus of helicopters".

Although the effects of this will really only be seen once the H160 enters production, the philosophy is clear: each of the manufacturer's sites will, for future programmes, specialise in a single competence, delivering major sections of a helicopter, fully assembled with wiring pre-installed, to a single site for final assembly.

That means, for example, that Donauwörth in Germany, as well as continuing to assemble the H135 and H145 medium-twins, will in future build rear fuselages, initially for the H160.

These specialised production sites are in place "which are ready to support the production of the H160 and new and existing models", says Faury.

The medium-twin H160 will be key to the company's success over the coming years. Pitched at a section of the market dominated by the Leonardo Helicopters AW139, certification and service entry are due in the first half of 2019.

Market reaction to the new type is so far unclear, although Airbus Helicopters is confident that the provisional deals it has accumulated will be sufficient to support output of 40-45 helicopters a year by the early 2020s.

Although work on the H160 had begun under Faury's predecessor as the X4 programme, he has successfully defined, launched and developed the product.

However, the same cannot be said for the X6, which was destined to replace the 11t-class H225 heavy-twin from the early 2020s.

Airbus Helicopters launched a concept study phase for the aircraft at the Paris air show in 2015, but the near collapse of heavy sales to the offshore oil and gas market since then, driving an uncertain future outlook, has forced the manufacturer to push back any industrial launch.

"We have seen an evolution in the structure of the market and we need to take that into account," says Faury. At present, the manufacturer is unable to develop a "solid and balanced business case" for the programme, he says.

In addition, the concept studies have shown "a lack of maturity from the supply chain to deliver disruptive technologies as envisaged", he says.

"Until we find those appropriate solutions and market certainty, we will not launch a fully fledged programme. It is not gone but it is likely to become something quite different to what we launched."

It is notable that in the oil and gas segment, the airframer's current success story is the H175, which racked up 19 orders in 2019. It is, he says, "our joker in the challenging oil and gas environment".

Faury notes that there remains considerable "overcapacity" of offshore-roled heavy helicopters, a situation which is unlikely to change despite recent rises in the price of crude oil.

"I do not think the recovery, or partial recovery, of the oil price will have a positive impact on the helicopter industry over the next couple of years," he says.

Instead, operators are shifting to super-medium-class helicopters such as the H175, which can "perform the vast majority of missions at a significantly reduced price".

Elsewhere, Faury has reshaped the manufacturer's portfolio: the most recent casualty was the H120 light-single, with production ending in late 2017.

"We did that to refocus the lower end of the segment where we can provide real added value to our customers," he says.

The axing of the H120 – never a shining star in sales terms and facing increasingly fierce competition – followed a previous decision to cull the AS365 light-twin, with Airbus Helicopters now concentrating its efforts in the light segment on the H125 and H130. That pair will "continue to evolve", Faury promises, with an unspecified announcement on the latter due at the HAI Heli-Expo show in March.

Another defining theme of Faury's tenure – and a wider Airbus group drive – has been the focus on "urban air mobility" and vertical take-off and landing air taxi concepts.

Airbus Helicopters is working on its CityAirbus concept – a first flight is due later this year – and a new unmanned air vehicle for the French navy, the VSR700. Built around the Hélicoptères Guimbal Cabri G2, this will offer the "capacity of a helicopter for the price of a drone".

But the manufacturer's ambitions stretch beyond simply building the aircraft in this emerging market segment, Faury says. "We want to play a leading role in on-demand helicopter booking platforms too. Urban air mobility drones are going to become a billion dollar business in the decades to come and our ambition is to be in the lead."

Although the growth of this new class of aircraft could threaten sales of light-singles, Faury believes there is room for both products, certainly in the short term. In addition, developments designed to support unmanned systems – sense and avoid technology, for example – will also find an application on its manned helicopters.

As Faury begins his transition to the new role, what advice does he have for his successor? Whoever is appointed should, he says, keep going with the industrial transformation "as it makes a real difference". In addition, they should "explore new markets and capitalise on the success of the H160".

His successor will, he adds, take over a "fantastic company at a historic and exciting moment for the industry".

What is clear, though, is that Faury is handing over Airbus Helicopters in a better condition than in which he found it. Which, against that metric, constitutes a success.