Rising jet fuel costs have been a constant talking point for airlines as they report their latest earnings and consider the outlook.

Those higher costs may not prove problematic for everyone in the short term – in some instances thanks to hedging, where airlines lock down a proportion of their near-term fuel supply at a fixed price – but the airline industry is at least temporarily losing one of the “free passes” that have combined in recent years to aid record industry profits.

As this plays out, some players are set to discover just how robust their business models are. 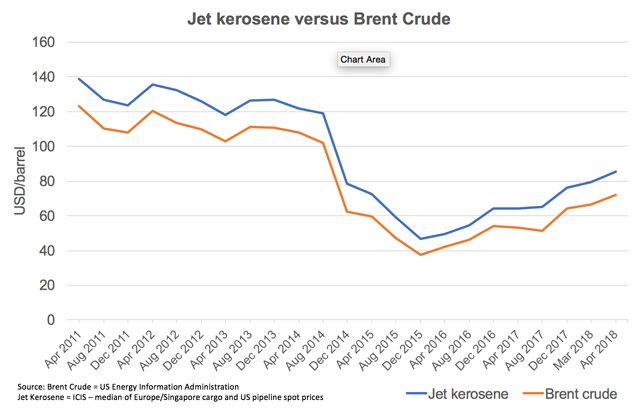 “Oil is a significant component of an airline’s costs, so its price is always relevant,” says Andrew Charlton, managing director of the Aviation Advocacy consultancy. “The relatively lower prices in the last few years – compared with the decade before – have been a very important element of the airlines’ recovery. It is not the only part of that recovery, but it was a factor.”

In regions such as Europe, those lower fuel prices have arguably been at the centre of recent growth.

The confluence of positive factors enjoyed by airlines in recent years has created a unique environment, meaning there are a lack of historical reference points when considering the potential impact of fuel price rises.

Analysts at KPMG described this conundrum in their Aviation Leaders Industry Report 2018, released at the turn of the year: “Generally, fuel prices rise with economic growth, but over the past years, oil prices fell while passenger demand continued to rise, giving airlines the ability to invest in growing capacity and networks, adding destinations and planes,” it states.

At the end of the first quarter of 2018, global jet kerosene prices – which tend to track just above crude oil prices – were on average around 28% higher year-on-year, data from energy intelligence provider ICIS, analysed by FlightGlobal, shows. Compared with two years earlier, the increase is around 61%. IATA has predicted that fuel price increases will have a $37.6 billion impact on the industry’s bill for 2018. 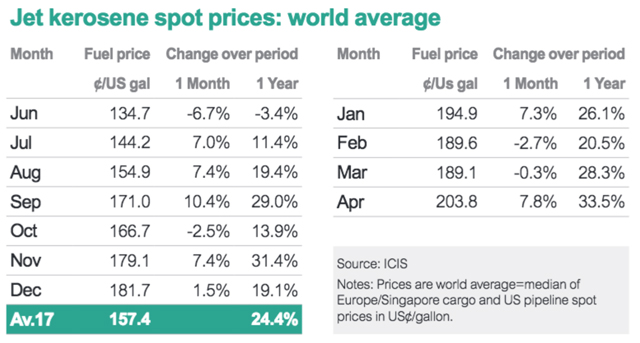 While these extra costs look swingeing, prices are still relatively low. In April 2012, for example, ICIS data shows jet kerosene prices averaged 329 cents/USgal; at the end of the first quarter this year, they averaged 189 cents/USgal, albeit on an upward trend.

The average price crept up to 204 cents/USgal in April and, since that last measure, oil prices have spiked again. Brent crude flirted with $80/barrel (around 222 cents/USgal) by mid-May.

In that context and in typically outspoken style, Ryanair chief executive Michael O'Leary told Bloomberg Television in mid-May that “spot prices close to $80 a barrel are going to lead to a significant shakeout in the industry as early as this winter. Some of those loss-making airlines who couldn’t make money when oil was at $40 a barrel certainly can’t survive”.

O'Leary is not alone in holding such a view. Ray Webster – who was chief executive of EasyJet between 1996 and 2006 – said at the Routes Europe event in April that the outlook for low-cost airlines was “quite worrying” because they were unprepared for future economic shocks. Carriers have not been put under pressure and have not experienced the typical peaks and troughs of the market, he says. Webster forecasts that rising oil prices will have a “dramatic” impact on carriers’ bottom lines.

But on the other side of the argument, industry body IATA appears relaxed about the price trend beyond the short term, stating in a May report that relief from price rises might not be far off: “Recent gains in oil prices have been driven by a combination of a gradual reduction in global oil inventories on the back of a tightening in supply, as well as heightened geo-political concerns,” it states. “That said, the futures curve remains consistent with a modest decline in oil prices from their current levels over the next 12-18 months. Indeed, the current curve points to oil prices falling to around $65/bbl by mid-2020.”

While the current set of cost headwinds facing carriers might be without truly meaningful precedent, recent history does offer some reasons for optimism, not least because higher oil prices tend to go hand-in-hand with stronger economic conditions generally.

“The reality is that the global airline business returned to profitability during the period of highest fuel price,” states Peter Morris, chief economist at Flight Ascend Consultancy. Morris does, however, acknowledge that fuel prices can have an impact on weaker players: “Arguably, the high fuel price drove marginal players out of the market, so when fuel prices fell this provided a bonus for consolidated industry, especially in North America.”

The ability of carriers to absorb rises in fuel price today needs to be judged on a case-by-case basis. Unsurprisingly, much depends on the underlying financial strength of a carrier.

Bernstein’s Roeska identifies two European airline groups he believes are more vulnerable to price rises than others: “In Europe, we see especially Air France-KLM and Norwegian with a lower level of fuel hedges than the industry average. This means these airlines will feel any movement in price – up or down – first. Also, their profitability lags behind the sector, meaning they have less room to accommodate higher fuel prices.”

Norwegian's potential vulnerability raises inevitable questions about how the low-cost long-haul model – a key part of the European carrier's business – might work amid higher fuel costs.

Morris says: “Low-cost long-haul may be more vulnerable because higher fares can cause tourism to switch to short-haul destinations.”

But Charlton notes that oil price rises are ultimately an industry-wide issue that eventually have to be swallowed by everyone: “The oil price goes up for all the airlines, so many of the advantages the new disruptors such as the low-cost long-haul carriers remain,” he states.

Indeed, the established players do not necessarily have any in-built advantage when fuel costs rise. Cathay Pacific, for example, offers an example of hedging gone awry: “Net fuel costs made up 30-41% of Cathay Pacific’s total operating costs during the past five financial years, making up the single largest cost item for the carrier, even when fuel prices fell,” analysts at DBS stated in an April report. “A large spike in fuel prices would affect its profitability while a quick drop would also lead to hedging losses.”

In the Asia region as a whole, however, concerns about the rising costs are being offset by growth in demand, according to Andrew Herdman, director general of the Association of Asia-Pacific Airlines. He told FlightGlobal in mid-May: “With oil prices in the seventies and still rising, you might expect to see passenger growth moderate somewhat, but there’s no sign of that yet. It is still robust. Premium traffic is good, anecdotally. So overall it is pretty positive.”

Elsewhere, major US carriers have been talking about moderating capacity growth should jet fuel costs continue to rise – a trend seen during the last period of higher oil prices. As a mature market, where significant consolidation has already played out, the impact of higher fuel prices on carriers is likely to be moderated. “These energy price levels themselves pose no structural challenge to the industry,” said JP Morgan in an April report.

Looking at the global industry as a whole, however, CTAIRA analyst Chris Tarry suggested in the June 2018 issue of Flight Airline Business that “even though the forecast rates of capacity growth are lower than in the recent past and closer to 1.5 times the rate of expected GDP growth, it is unlikely that higher yields and revenues will be able to offset the rise in the price of fuel, and in other costs”.

Roeska concurs when it comes to the European market: “In my opinion, the current ability to pass on fuel cost is very limited in Europe," he notes. "Capacity is still growing at 6%-plus in Europe, and in that environment airlines need to rely on yield stimulation to fill the planes. The market price is the balance of capacity and demand – passing on higher cost will only work if the airlines reduce capacity growth."

Morris meanwhile acknowledges that “there is a price elasticity on fares", which varies by region and type of traffic. He adds that leisure traffic has “the highest price response” so is most vulnerable to customers looking elsewhere should fares increase. That, he says, means low-cost carriers are more likely to feel negative impacts should fuel prices continue to rise.

Charlton, however, notes that history suggests the industry might be well placed to pass on those higher costs: “As a general comment, airlines have been much better at passing on fuel price rises than many other cost increases,” he states.

Whatever happens regarding fares, new-generation, fuel-efficient aircraft are primed to make a difference if fuel costs continue to rise, after years of low oil prices prolonged the life of older aircraft.

For manufacturers, the equation is a simple one, and they see opportunities in recent oil price movements. “I think we have seen a period where replacing old aircraft with old aircraft didn’t really hurt because you still had the fuel price benefit,” Embraer’s chief commercial officer Arjan Meijer told FlightGlobal in mid-May. “Now I think we are starting to see, from a fuel burn perspective, a focus on new technology.”

On that topic, IAG chief executive Willie Walsh recently bemoaned delays to deliveries of its Airbus A320neos – specifically citing how unhelpful that was during a period of rising fuel costs.

Speaking at an ISTAT conference in May, SpiceJet’s chief financial officer Kiran Koteshwar meanwhile said the rise in fuel prices was making the case for A320neos or Boeing 737 Maxes more compelling. “The Max and the Neos basically come through a more efficient deployment when fuel reaches the $75 mark,” Koteshwar says.

Morris also sees an advantage for adopters of newer aircraft technology, stating: “Since fuel is a common input, I would argue it benefits operators with new aircraft and efficient operations, who can flex the location of their operations more easily.”

Whatever the strategy taken by carriers, the view of Southwest Airlines chief executive Gary Kelly reflects the fact that higher fuel costs are not the be all and end all: “If we were not able to raise fares [in light of higher jet fuel costs], would that immediately lead to a decision to stop flying some of our airplanes? Well, not if they're still profitable,” he said after the Dallas-based operator released its first-quarter results.

As Morris concludes: “Higher fuel prices may deter new entrants and may also reduce profit potential marginally. But while demand remains strong so will profits.”

Amid those profits on an industry level, however, it remains to be seen whether carriers that have struggled in the recent benign environment globally might find persistantly higher fuel costs too much to handle, and whether even the successful airlines might begin to soften growth plans.