Bombardier for years has insisted airlines in the coming decades will need many thousands of 100- to 150-seat aircraft – a niche filled by the CSeries and arguably dismissed by major manufacturers.

Embraer has likewise predicted surging demand for aircraft as it develops its new E2 line of E-Jets, including a stretched E195-E2 that hits the 146-seat mark.

But with just six weeks until the Farnborough air show – at which manufacturers spare no expense highlighting sales achievements – the fact remains that Bombardier and Embraer have secured only modest orders for new 100- to 150-seat aircraft.

Indeed, that segment – pressured here by regional jets and there by small versions of the Boeing 737 and Airbus A320 families – has long struggled to attain broad commercial success.

But change is afoot, with Airbus poised to take majority ownership of CSeries and Boeing continuing a play to combine with the commercial aircraft division of Embraer.

Those deals stand to catapult E2s and CSeries into the arms of some of the world's largest manufacturers – companies with global reach and longstanding relationships with the largest airlines.

This raises questions: if the deals close, will Airbus and Boeing put their full commercial weight behind their acquisitions? If so, might sales of 100- to 150-seat aircraft significantly accelerate?

Industry observers say such questions are tricky to answer. They agree Airbus's and Boeing's support should boost sales, but by how much remains uncertain.

"I'm betting it would provide substantial upside," says Richard Aboulafia, vice-president of analysis at consultancy Teal Group, of Airbus's involvement in CSeries. But, he adds: "There's no way to model these things."

Aboulafia says Airbus can provide CSeries with manufacturing cost efficiencies Bombardier could never achieve – efficiencies derived from an operation at Airbus that churned out 719 commercial aircraft in 2017.

Boeing could provide similar benefit to Embraer, he adds.

"A joint company or alliance would make a lot of sense and provide a lot of upside for the E-Jet," Aboulafia says. Boeing can provide "supply chain muscle".

"Having Airbus behind [CSeries] is really going to help," says Dimitroff, who supported Bombardier during a hearing last year before the US International Trade Commission. "Is it going to make sales shoot through the roof? I don't think so."

He expects modest gains because the CSeries remains a relatively small programme to begin with, with Bombardier planning to produce 10 aircraft monthly by 2020.

Flight Ascend Consultancy has therefore left unchanged its prediction that Bombardier will deliver "in excess of" 1,350 CSeries through 2036.

"We insist the size of overall market is probably the same as we predicted before," Dimitroff says.

A Bombardier CS300 in the livery of AirBaltic, one of the first CSeries customers 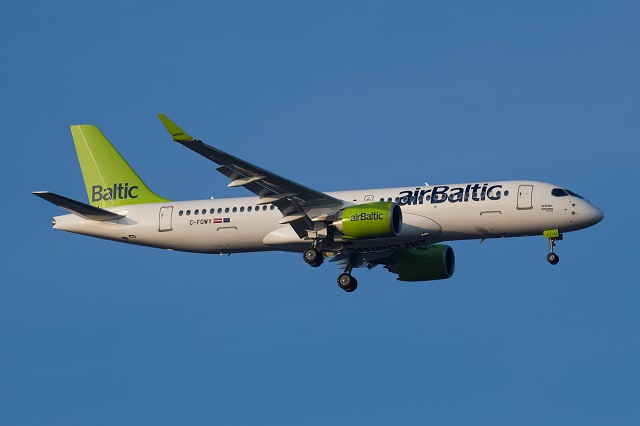 Slam-dunk commercial success for aircraft optimised to carry 100 to 150 seats has eluded manufacturers for decades.

With Airbus and Boeing now controlling the market for 100- to 150-seat aircraft – and doing so with shrunken versions of aircraft optimised to carry more passengers – Bombardier and Embraer saw an opening.

In the past decade they have shifted, to differing degrees, towards larger aircraft.

Bombardier developed the Pratt & Whitney PW1500G-powered CSeries, promising a 20% reduction in fuel use per passenger. 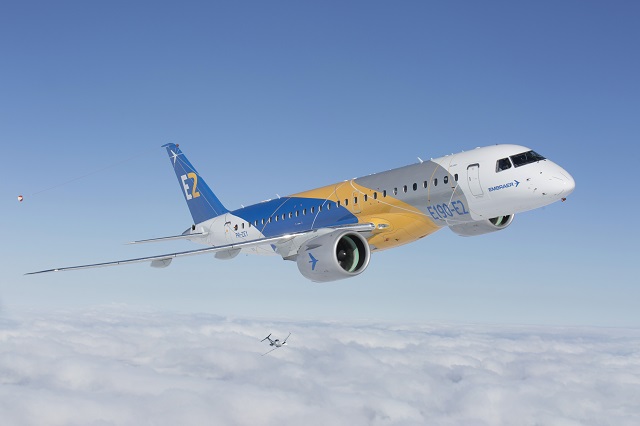 Those companies have much riding on their investments and predict a wave of demand.

The companies say several trends work in their favour.

Increased travel demand and an ongoing pilot shortage drove that trend, as did the fact that no manufacturers still produce small regional jets.

Airlines today operate some 15,000 737 and A320-family aircraft worldwide, nearly double the level 10 years ago, data from Flight Fleets Analyzer shows. Capacity in available seats jumped by 50% between 2007 and 2017, the data shows.

But in the past several years, as capacity has jumped, fares and passenger yields have slipped, leaving airlines scrambling to lift returns, the forecasts say.

Bombardier and Embraer say airlines can fix that problem by "right-sizing" – meaning acquiring aircraft specifically optimised to carry 100 to 150 seats, like E190-E2s, E195-E2s and CSeries.

Airlines can use such aircraft to expand, at lower cost, into high-yielding mid-size markets and to replace less-efficient Boeing and Airbus models in existing markets, the forecasts say.

Aircraft such as the CSeries can operate many routes more efficiently than larger types such as 737 Max 7s, he says.

"There's a lot of inefficiency in the soft end of the A320 and 737 segments – where they have too much plane," he says. "You fly a lot of empty seats, or you bring the price down."

Schonland estimates that within 20 years airlines will need 5,000 CSeries-sized aircraft, a figure he says accounts for replacement of comparable aircraft now in service and for growth.

Predictions aside, airlines have been relatively slow to place CSeries and E2 orders.

The Montreal-based company had delivered 34 CSeries as of 1 June.

Airlines have also ordered only a modest 100 E175-E2s, though that figure reflects unique factors, observers note.

Bombardier's and Embraer's decisions to compete in the larger-aircraft space set off a chain of events leading to the current merger mania.

CSeries struggled amid development delays and an early lack of orders from major airlines, but in February 2016, Air Canada bought 45 CS300s.

But the celebrations proved short-lived.

In April 2017, Boeing filed a petition with the US Department of Commerce, claiming a heavily subsidised Bombardier violated trade law by selling CSeries to Delta at the artificially low price of, in Boeing's estimate, $19.6 million each.

Bombardier denied the allegations, but the Commerce Department slapped CSeries with 292% import tariffs.

The US International Trade Commission eventually threw out the entire case when it determined Boeing suffered no harm, but not before Bombardier, facing imminent tariff threats, handed CSeries to Airbus.

Bombardier agreed to give the European manufacturer 50.01% of CSeries in exchange for marketing, sales and procurement support, with no money changing hands.

The deal will remove control of CSeries from Bombardier, leaving it with 33% ownership and a commercial division anchored by CRJs and Q400 turboprops.

Bombardier officials have said the Airbus deal will close as early as mid-year.

Perhaps feeling threatened by an Airbus-supported CSeries, Boeing responded in kind, confirming last year that it was negotiating a "combination" with Embraer's commercial unit.

Those talks continue, and neither party has announced many details.

"Both Bombardier and, to a lesser extent Embraer, wound up in this position because they wanted to move up market and move away from regional jets," says Aboulafia. "That put them in a direct cost comparison with people who have outputs that are 10 or 20 times greater than them."

Though much remains unresolved, observers largely view the deals as positive for sales of 100- to 150-seat aircraft.

"It’s a win-win for both sides," says Dimitroff of the pending Airbus-CSeries deal. "I think there will be a boost to credibility and a noticeable boost to sales."

Instead of facing off against Airbus's sales organisation, CSeries now stands to gain the full support of that unit, which has longstanding relationships with the world's largest airlines, Dimitroff says.

CSeries will fill out Airbus's narrowbody portfolio to include aircraft ranging from 108-seat CS100s to 240-seat A321neos, he adds.

However, Dimitroff questions how badly Embraer needs Boeing. The Brazilian manufacturer has had broad success selling current-generation E-Jets, and the slow pace of E2 sales reflects low fuel prices, which erode the efficiency savings of new aircraft, and the relative youth of in-service E-Jets, he notes.

Also, so-called "scope clauses" in US major airlines' pilot contracts have effectively shut E175-E2s out of the US market, home to airlines that buy the bulk of regional jets. Those clauses prohibit major carriers' regional partners from operating the heavier E175-E2.

"The fact sales are slowing down is likely a sign of market slowness," Dimitroff says of E2s. "Once that fleet starts to age and the E-Jets need replacement, they can sell more E2s. I think Embraer can do it on their own."

In addition, Embraer does not bring Boeing the seamless narrowbody portfolio that the CSeries brings Airbus, he adds, noting a roughly 30-seat gap exists between E195-E2s and 737 Max 7s.

Dimitroff and others suggest Boeing's interest rests at least partly on a desire to tap into Embraer's skilled engineering workforce and lower development costs.

"I don’t think their commercial departments need to hook up at the moment, because they are very separate products," he says.

Schonland says future sales depend largely on the degree to which Airbus and Boeing, should they acquire ownership of the smaller aircraft, fully embrace those products.

"Can you trust Boeing's love? Can you trust Airbus's love?" Schonland says. "Will they love the adopted child like they will their other children?"

"Airbus seems to be more collegial," he says. "They seem more likely to make this work."

Story updated on 7 June to note that the E195-E2 actually can accomodate 146 passengers.