Volaris sees potential for further revenue synergies from a budding relationship with Frontier Airlines, as the two airlines prepare to launch codeshare operations later this month.

There is also potential to co-locate at US and Mexican airports to achieve cost efficiencies, he adds.

"In Cancun, clearly there's an opportunity since we are the largest international carrier in Cancun," says Blankenstein. "There will be loads of opportunities for Frontier to co-locate with us in the international terminal."

Frontier operates out of terminal 3 at Cancun, while Volaris is based in terminal 2. Co-locating at Denver, home to Frontier, is also a possibility, Blankenstein points out. "If there [are] some cost synergies – for example co-locating at airports – we are going to go after that."

Codeshare operations will launch on 23 August, with Frontier and Volaris planning a launch event that day at San Antonio – one of eight connecting points for the airline's codeshare pact.

Codeshare sales began earlier this month. While it is still early days, Blankenstein indicates Volaris is so far pleased with initial bookings. The partnership will cover more than 260 routes, and will add 53 and 18 new destinations to Frontier's and Volaris' networks, respectively. The flights will connect through eight points – seven in the USA and Cancun in Mexico.

"We see benefits on the revenue side, in terms of additional volumes and connecting flow," says Blankenstein. "We can add some niche markets, such as those we can't operate alone because they are too thin, and bring more passengers to existing routes." 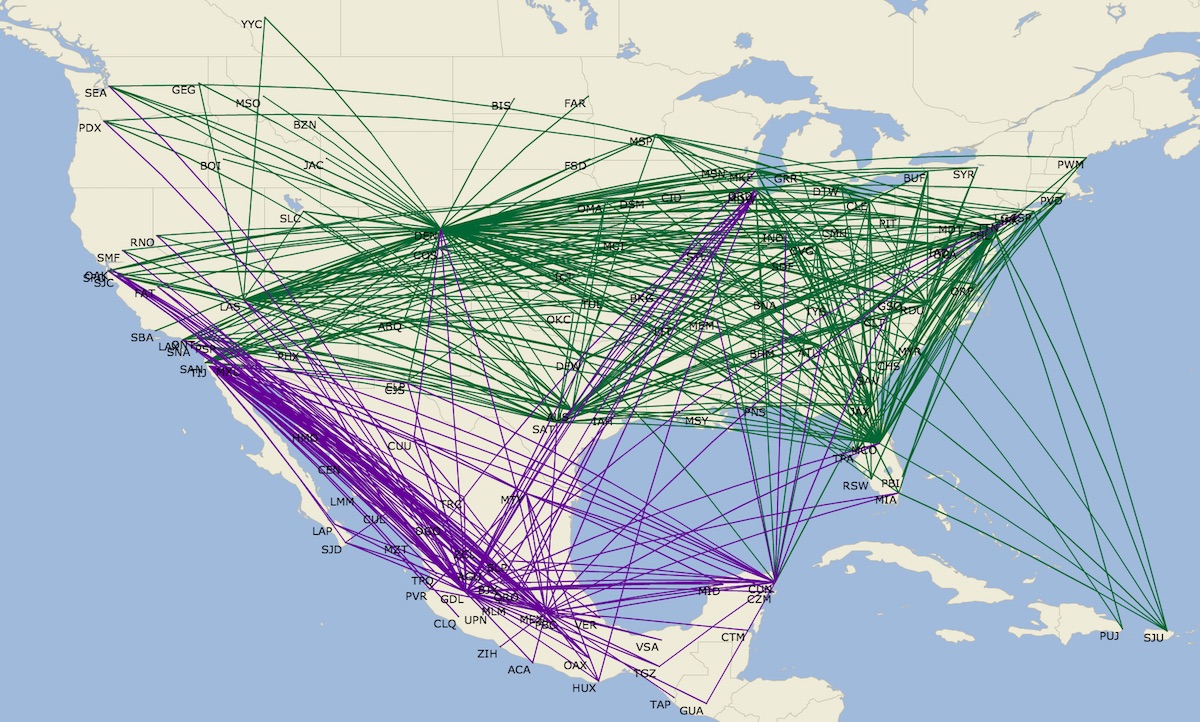 Codesharing with Frontier also allows Volaris to grow in new customer segments like the US southbound leisure market, in which Volaris is not a big player. The Mexican carrier focuses on the northbound visiting friends and relatives segment for its US flights.

"We are going to leverage the new connecting flights to grow our existing business in the US," says Blankenstein. The airline has grown international capacity by about 4% year-to-date and expects to see more growth through the rest of the year.

He points out that Volaris and Frontier are only codesharing, and do not have anti-trust immunity for a joint venture. Both airlines are thus prohibited from co-ordinating schedules and capacity.

"That [US] growth will be planned on a standalone basis," says Blankenstein.

Unlike Volaris, Frontier's international network is relatively small. It will operate to only Calgary, Cancun, Montego Bay, Puerto Vallarta and Punta Cana in the coming months. Blankenstein points out that Los Cabos and Puerto Vallarta are sometimes seasonal destinations for Frontier and thus are currently excluded from the codeshare with Volaris.

But he sees potential to include Frontier's international network in the codeshare in the future, although this is unlikely to happen this year. In the same vein, the two airlines are not considering a deeper partnership, such as a joint venture, as yet.

"Right now at this point, we want to focus on a non anti-trust immunity codeshare and maximising the amount of revenues," says Blankenstein.

The codeshare between Frontier and Volaris is coming online as the US-Mexico transborder market faces some recent challenges.

US ultra low-cost carrier Spirit Airlines, for which Cancun makes up 2% of overall capacity, has observed softness in demand to the leisure market following travel warnings issued by the US Department of State calling for US citizens to be cautious of increased crime.

While Volaris does not serve Mexican beach destinations from the USA, Blankenstein says the airline has experienced weakness in US-bound leisure routes such as from Mexico to Las Vegas and Orlando.

"We are seeing some softness, mostly because the peso depreciated significantly, and it's become much more expensive for Mexicans to go on holiday," he says.

The US-bound visiting friends and relatives market, however, is "holding up very well", he adds.