Analysis of FlightGlobal schedules data for April covering Europe's big low-cost carriers shows an increase in the proportion of routes where two or more of these airlines compete directly, although there is still head-to-head competition between these operators on only a minority of their routes.

FlightGlobal's annual analysis of overlapping routes among EasyJet, Norwegian, Ryanair, Wizz Air and Vueling shows increases for all five carriers in the proportion of flights deployed on routes in direct competition with at least one other of these operators. In total, almost a quarter of all flights operated by these five carriers this month are on routes where there is competition between airlines in the group.

All five carriers have boosted capacity this April compared with the same month in 2016, FlightGlobal schedules data shows. And all five now deploy a bigger share of their overall flights on routes where there is competition between major LCCs.

Of the five, Ryanair has added the most capacity over the last year. The Dublin-based budget carrier will have operated just over 5,000 more flights this April than in the same month of 2016. Of these, 19% are on routes where at least one of the other major LCCs operates. That is slightly higher than the 18% share in April 2016.

Europe's two biggest LCCs EasyJet and Ryanair have largely steered clear of direct competition during their development, aside from some small skirmishes. The continued expansion of both, particularly Ryanair, mean the two now compete on 74 routes, across which they operate a little over 4,500 flights each.

While this is the highest overlap between Europe's low-cost operators, it relates only to a small part of their respective networks. The overlapping routes account for 7.5% of Ryanair's flights, for example.

The two carriers largely overlap on routes from the UK to Mediterranean resorts – competing on nine routes from Bristol and eight from Liverpool, London Stansted and Manchester.

But it is at Berlin Schonefeld – where Ryanair has built up its network since launching a base in the German capital 18 months ago – that the carriers compete on the most routes, facing off on 12.

Highest-frequency competition between the pair occurs at Belfast International-London Gatwick. The two will have operated over 600 flights in April on the route – EasyJet operating the route six times a day and Ryanair four times daily. Ryanair's arrival last winter on Catania-Milan Malpensa has brought the two carriers into competition in the Italian market – the two operating almost 500 flights in April between them.

But while it remains a relatively small part of their respective networks, it is an increase of around 50% on the same point a year ago. EasyJet and Ryanair are this month competing directly on 28 routes that they did not a year ago, analysis of FlightGlobal schedules data shows.

It is Ryanair that has mostly added to competition on these routes, including five from Schonefeld and four from Belfast, with EasyJet moving to compete directly with Ryanair on only three routes – London Luton to Lanzarote and Tenerife, as well as Manchester to Krakow – while a fourth, Bristol to Ibiza, marks merely an earlier start to its summer service. 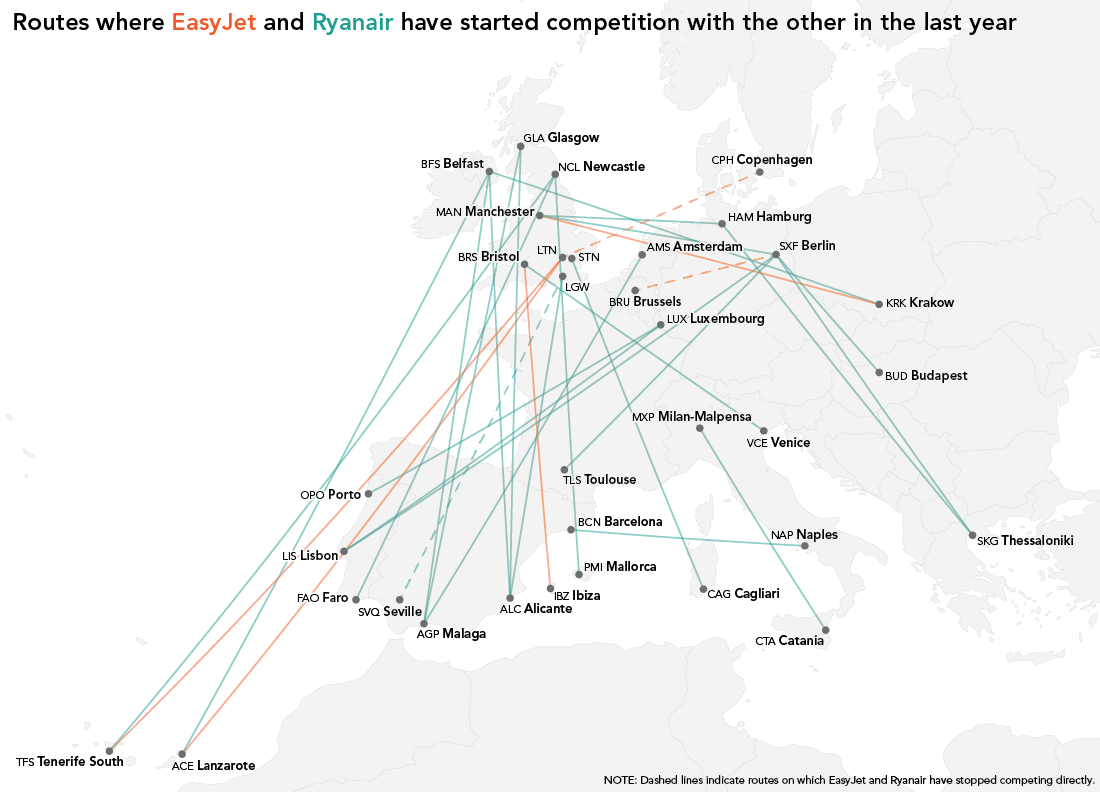 In terms of the number of routes, Ryanair's biggest overlap is with EasyJet, but the Irish carrier still has fractionally more capacity deployed on flights overlapping with Vueling. The two carriers directly compete on 62 routes, spanning almost 5,000 flights a month from both operators.

Almost half of the overlap is at Barcelona El Prat airport – from which the two carriers directly compete on 27 routes.

The two airlines have added a dozen new routes on which they directly compete – split equally in terms of which airline has begun services in the last 12 months. All these routes are to Spanish resorts, bar one: Ryanair's Barcelona connection to its new Naples base. 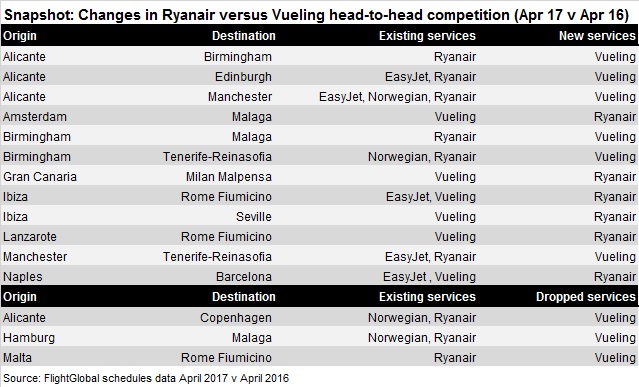 Vueling, though, has dropped three routes on which it formerly competed directly with Ryanair: Copenhagen-Alicante, Hamburg-Malaga and Rome Fiumicino-Malta.

There are also now a dozen routes where Ryanair and Vueling compete with Norwegian, including seven from Barcelona.

Of all the major European LCCs, Vueling has always been the operator with the largest direct competition with its LCC rivals. That in part reflects its main base being at Barcelona – where EasyJet, Norwegian and Vueling are also present. But it also reflects Vueling's strength in serving Spanish holiday-resort destinations – another staple of low-cost rivals.

FlightGlobal schedules data shows that more than half of Vueling's flights this month are being deployed on routes where one of the four major European LCC rivals compete.

Vueling now competes directly with EasyJet on seven more routes than it did in April last year, and the two have the fourth-highest number of direct match-ups – competing on 32 routes. The additional routes are largely new Vueling services from Paris Charles de Gaulle and links to Spanish resorts – though both carriers have started Lisbon-Zurich flights since last April.

While Vueling has added most of the new direct competition with EasyJet, it has also come off four routes on which it formerly competed with the UK carrier.

One of the fastest-growing areas of direct competition among the major LCCs is between Ryanair and Wizz Air. In April 2016, the two airlines directly competed on 19 routes. This April the two will compete on 30 routes. That follows Ryanair's move in October to open a base at Sofia – where the two now directly compete on seven routes. The airlines are now also in opposition on several routes from Gdansk in Poland and at another new Ryanair base, Timisoara in Romania.

Interestingly, all the new match-ups between Wizz and Ryanair have been instigated by the Irish carrier – and it is Wizz that has exited the three routes where the two no longer compete directly. 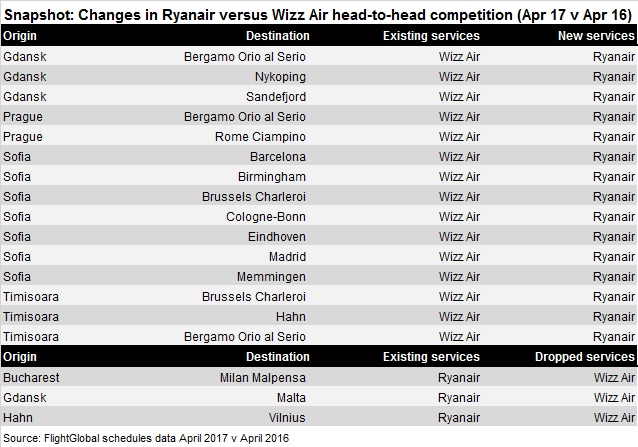 By comparison, Wizz has little or no direct overlap with any of the three major European LCCs. The direct competition with Ryanair in part reflects the Irish carrier's continued expansion in central and eastern Europe, but also that Wizz is one of the few European operators to serve many of the secondary airports that Ryanair originally built much of its reputation developing. The two carriers compete on a number of routes from secondary airports like Bergamo Orio al Serio near Milan; Brussels Charleroi; Hahn, near Frankfurt; and Rome Ciampino.

Alicante-Manchester now attracts four of the big low-cost players – as everyone but Wizz operates on the route. Vueling and Norwegian joined the fray last summer.

Ryanair has the highest frequency, serving the Spanish resort twice daily. EasyJet operates the route daily, while Norwegian and Vueling also serve the market. They are among eight carriers on the route, which is also contested by leisure carriers Monarch Airlines, Jet2, Thomson Airways and Thomas Cook.

Norwegian, Ryanair and Vueling compete as a trio on 11 routes, chiefly from Barcelona. They include Barcelona to Palma de Mallorca, on which the three carriers operate 432 return flights on, with Vueling accounting for more than half of them. Air Europe also contests the route. 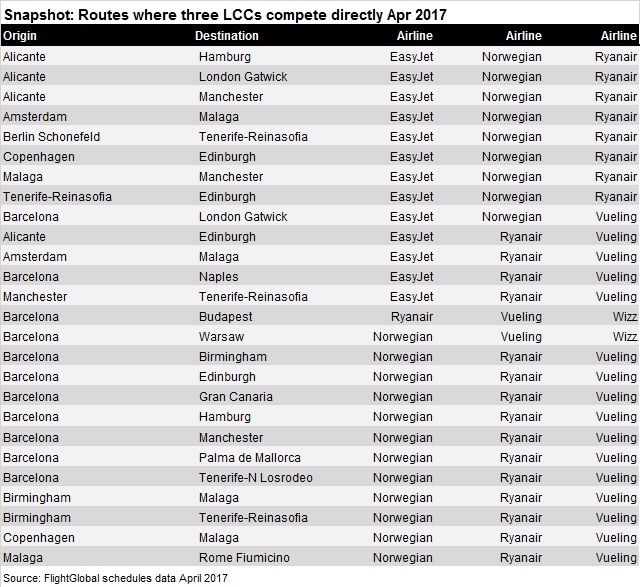 Barcelona remains a hotbed of direct low-cost competition. The five LCCs are operating more than 8,000 flights from the airport, across 132 routes, this month. Of these, 50 routes have two more of these LCCs operating.

Four new Barcelona routes have additional competition this April. Norwegian has launched competing services against Vueling to Bilbao, Dusseldorf and Reykjavik, while Ryanair now flies against Wizz on the Sofia route. Vueling, though, has dropped off the Newcastle and Stavanger routes, on which it had been competing with Norwegian.