Russian tourism arrivals in Thailand rose sharply in early 2017, but airline capacity between the two nations shows no immediate signs of returning to the glory days of 2009-2015.

Russia is an important market for Thailand's tourism and travel sector. Statistics from Thailand's Ministry of Tourism and Sports show that it is Thailand's largest source of non-Asian visitors. In March 2017, arrivals from Russia leapt 44% to 157,000, which followed similarly strong growth in February and January.

The strong growth in tourism shows something of a rebound from 2014, when the weakness in energy prices caused the rouble to fall to parity with the Thai baht, severely impacting demand from Russia. That plunge was a factor in the collapse of Transaero, which was the capacity leader on Russia-Thailand routes from 2006 until 2014.

At present, the rouble is trading at Bt0.56, well above its low of Bt0.44 in February 2015, supporting the recovery of the tourist market.

Despite the improving outlook for arrivals, however, FlightGlobal schedules data suggests that scheduled carriers, at least, are taking a graduated approach to adding more capacity. It is important to note that this data does not reflect capacity provided by charter carriers, which play a key role in this market during Russia's winter months.

CAPACITY AS MEASURED BY SEATS ON RUSSIA-THAILAND ROUTES

That growth is coming from one carrier – Thai – which returned to the Russian market in December 2016. Aeroflot and S7 Airlines will keep capacity steady in the coming northern winter months, when the Russia-Thailand market usually spikes.

By comparison, Thai will double capacity in December, hitting 6,188 seats. SRS Analyzer shows that it will operate four-times-weekly Boeing 777-300ER services on the Bangkok Suvarnabhumi-Moscow-Domodedovo route, compared with twice-weekly services in December 2016. 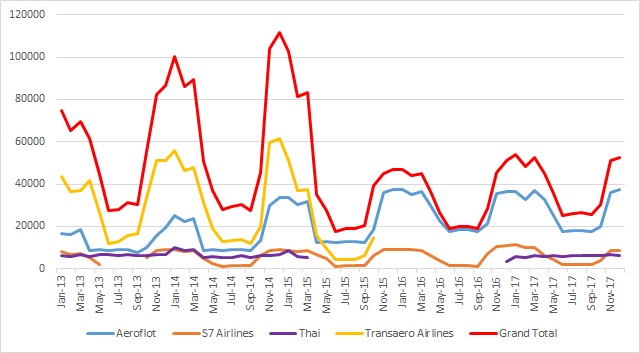 S7, for its part, adjusted its Thai services in December while keeping overall capacity static. It has cut its weekly 767-300 services on the Krasnoyarsk-Bangkok, Novosibirsk-Phuket and Vladivostok-Phuket routes, and will instead operate four-times-weekly services on Irkutsk-Bangkok Suvarnabhumi, all operated with Airbus A320s.