India is ready to start seeking export buyers for its Tejas light combat aircraft (LCA), supporting its message by sending two of the fighters overseas for the first time.

“Our aim is to ensure we have a quality product – not just for indigenous requirements, but also for export,” he says.

The first international deployment with the Tejas involved flying 970nm (1,800km) from Bengaluru to Jamnagar, before covering a further 650nm for a second refuelling stop in Muscat, Oman. The final leg was a 430nm transit to the show venue at Sakhir air base, near Manama. One aircraft took part in the daily flying display, with the deployment supported by around 50 personnel. 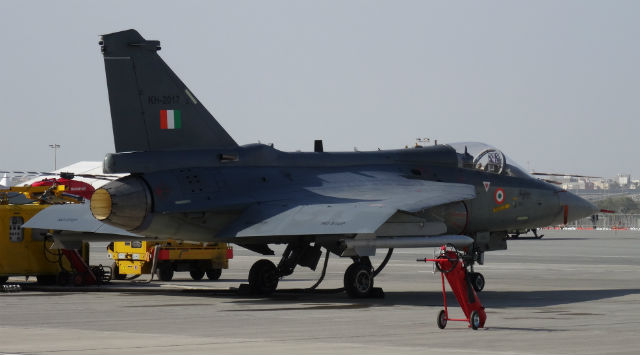 “In terms of interest, this is a good show for us,” says Christopher, who adds one nation in the region has requested information about the Hindustan Aeronautics (HAL)-built type. “We will have interested people coming to India in April,” he reveals.

“The LCA has been [made ready for production], and this year we will see an additional number of aircraft entering into [Indian air force] service,” says HAL chief executive R Kaveri Renganathan. “We are currently ramping up production – any export order, we would be ready to dovetail,” he adds.

Production of the Tejas will rise to seven units this year and eight in 2017, before doubling to 16 the following year. The latter advance will be made by building the Mk1A version of the fighter, which introduces numerous production and system enhancements over an initial batch of 20 jets. India plans to acquire 100 examples in the improved standard.

Also speaking at the show, Aeronautical Development Agency programme director C D Balaji notes more than 3,000 flights have been made by Tejas aircraft, and the air force has received its first production example. “It is a parallel process between test and evaluation and production,” he says, while adding: “there is a significant amount of maturity.”

Meanwhile head of flight test programme, Air Vice-Marshal J Chalapati, says work is under way to integrate a new advanced air-to-air missile with the Tejas. “There will be additional details within the next couple of months,” he adds. Russia’s Vympel R-73 weapon has already been cleared for use by the combat aircraft.

HAL’s Dhruv advanced light helicopter was also on show in Bahrain, with four examples flown by the Indian air force’s Sarang display team. The DRDO brought its indigenous airborne early warning and control system development of the Embraer ERJ-145 to the same event in 2014.