Belgium has taken delivery of the last of four examples of the TTH troop transport variant of the NH Industries NH90 helicopter.

Handed over on 13 November at a ceremony at the Marignane production facility of NHI’s majority shareholder Airbus Helicopters in France, the rotorcraft will be based at Beauvechain air base near Brussels.

The NH90 TTH was joined at the delivery event by two of its sister ships, which had been on a harsh environment training exercise near the Pyrenean mountain town of Saillagouse in the southwest of France. 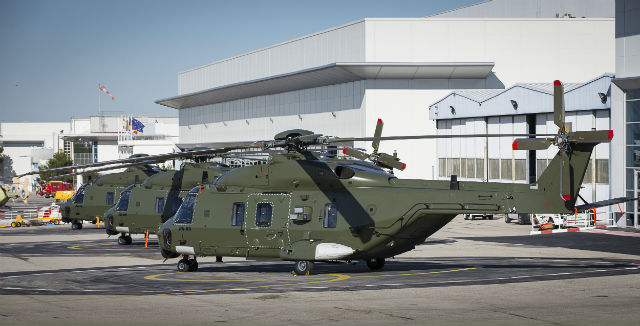 All four of the 10.6t rotorcraft are operated by the 1st wing of the Belgian air component. The service also has four of the NFH naval model on order, with the third example due to be handed over on 25 November and the fourth following in early 2015.

So far its Turbomeca RTM322-powered fleet has accumulated 450 flight hours with an availability of around 70%.

“The delivery of this NH90 TTH is the result of a very good co-operation between industryand the Belgian defence forces,” says Vincent Dubrule, NHI president. “From now on, NHI and its partner companies will worktogether in order to make sure the NH90 remains at the level of excellence demanded by itscrews throughout its service life.”

This delivery is the 217th for the programme, and the 38th so far this year. NHI remains on track to hand over around 52 of the helicopters this year, it says.