Boeing bullish on E/A-18G despite US budget omission

Boeing insists that prospects for additional sales of its E/A-18G Growler remain strong domestically and internationally despite a lack of funding for the aircraft in the US military’s budget proposal for fiscal year 2015.

“Domestically, there continues to be interest, particularly in the Growler,” said Boeing president and chief operating officer Dennis Muilenburg on 10 March speaking at a JP Morgan conference in New York. “We know the Growler has been identified as an desirable capability that has been unfunded.”

The budget proposal must still be approved by Congress, a process that will take months.

Mackenzie Eaglen, analyst with the American Enterprise Institute, says it is possible the Department of Defense left the aircraft off the budget because “they might fully expect Congress to add them [back] in.”

Boeing says it will lobby lawmakers for additional funding.

“We are mid-stride in the negotiating process,” Muilenburg says. “While it is urgent, we have some time to work.” 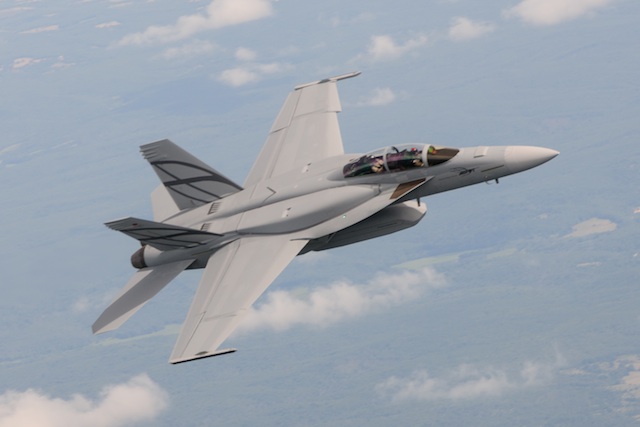 Barring additional orders, a production slowdown or company-funded production, the St Louis factory that makes both the Growler and the F/A-18E/F Super Hornet will run out of work near the third quarter of 2016, Muilenburg says.

But Boeing needs to place orders for long-lead time materials in the coming months if it wants to extend production. The company received a boost from the fiscal year 2014 budget, passed earlier this year, which included $75 million for that purpose.

Muilenburg says the F/A-18E/F - a “fourth generation fighter” - remains one of the most-capable combat aircraft, and comes at a reasonable price.

“Look at the capability that the F-18 brings to customers, combined with the cost point. There is no other airplane that can match that,” he says.

The aircraft, with engines and weapons systems, cost about $52 million each, while Growlers cost $8-9 million more, according to the company.

In comparison, although its unit cost is declining, each F-35 Joint Strike Fighter still costs a little under $100 million, according to Lockheed Martin. However, it predicts this will fall to less than the price of fourth-generation fighters by 2019.

But Boeing points out that the Growler’s advanced electronic warfare systems can help newer aircraft like the F-35 be more effective. And it says an end to production would damage the USA's industrial base.

“If funding to extend production of those aircraft isn’t provided, unique industrial capabilities will be lost and the US will be solely dependent on one tactical aircraft manufacturer for years to come,” Boeing tells Flightglobal.

Muilenburg is also optimistic about orders from other customers, noting that “significant campaigns are underway” to secure orders from countries like Australia, Denmark and Malaysia, he says.

The company is pitching its Advanced Super Hornet, which has better engines, avionics and weapons systems, including an upgraded radar and improved infrared search-and-track abilities, Boeing says.

The Advanced Super Hornet has a belly-mounted enclosed weapons pod that can carry 1,130kg (2,500lb) of munitions and an external conformal fuel tank that can hold 3,500lb of fuel.

Boeing produces F/A-18E/Fs at a rate of 44 aircraft yearly, although production is scheduled to slow to 36 aircraft in fiscal year 2015.